Weddings are serious business. Not only are two people committing to spend the rest of their lives together, but the big day comes after months of planning, excessive amounts of money spent and an extremely stressed out bride, hoping all will go according to plan. 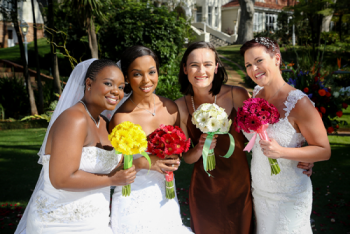 If anyone were to find the funny amidst the wedding bliss, it would be Alan Committie. The South African stand-up comedian will narrate the reality television show, Four Weddings South Africa, which launches this week.

Similar to Come Dine With Me, Committie will provide humour to the settings on screen. He says: “I’m there as a voice-over figure to tie everything together in a lighthearted way.” Though Committie was not able to attend the weddings, he was given an inside glimpse into each bride’s special day in the studio, where he had the freedom to ad-lib around the script, adding his unique sense of comedy to the show.

“It’s interesting to try and create a persona without being live on screen in person,” he says. “It was a challenge because I didn’t have my physicality to support me,” says Committie. “I love comedy and all the various formats in which you can make comedy work. This year I’ve explored comedy in its many different forms. I did Little Shop of Horrors, which was a slightly more serious take, I’ve just finished an operetta in Cape Town, which was a very broad pantomime kind of part, and now I’m doing my stand-up show again, which is a very overt comedy vehicle.

“This seemed like a good way to do comedy using only my voice.” Each week, four brides go head-to-head in an at tempt to host the perfect wedding. The ceremony that takes the cake will see the bride and groom whisked off on a dream honeymoon. “I think it’s a fun concept and people are going to buy into it in a big way, because weddings are so integral to all of our lives,” says Committie.

“If we haven’t gotten married, we know people who have married and it’s very strong in our public consciousness.” From naked brides to biker brides, and Zulu brides to Tswana brides, Four Weddings South Africa has it all. “It was extraordinary,” he says. “I would arrive at the studio and the director would have a big grin on his face.

He would say: ‘This week you’re in for a surprise.’ During the first couple of episodes I thought these are fun, then we started getting into the interesting stuff – the bikers’ wedding, there’s a nudist wedding which reveals a lot more than you would want. There’s a goth wedding. It really is fantastic and you are reminded that all kinds of people exist and want to get married and they want to get married in their own way.

“If there’s a strong message to the series: no matter what we might think, if people are happy and create a scenario for themselves that they can relate to, it can still be a happy and beautiful day.”