FILE PIC: Hugh Masekela, speaks at a special event to give congratulations to Lira and MiCasa on being invited to perform at President Obamaâ€™s inaugural ball, as well as to himself on being nominated for his second Grammy Award. 16 January 2013. Picture: Tracy Lee Stark

According to a statement from SABC 2  The Bantu Hour is “a scripted sketch and variety show” and will feature popular comedians as well as actors.

“When we came with this concept, this really brought memories of days when we used to do the Pure Monate Show back then,” says Kagiso Lediga who hosts the show with Masekela.

“The comedy features a myriad of comedians, so viewers are in for a treat. The inclusion and working with Bra Hugh was a dream come true for me. I have learnt so much from him and it is indeed an honour working with him”

Each episode will feature a celebrity guest, a stand-up comedian and a musical performance. Celeste Ntuli, Trevor Gumbi and Chris Forest are some of the comedians who are also on the show. 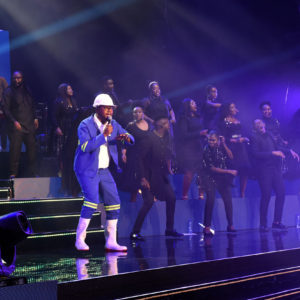