Another artist's recreation of Connie Ferguson painting circulating on social media has many going crazy because of the perfect depiction. 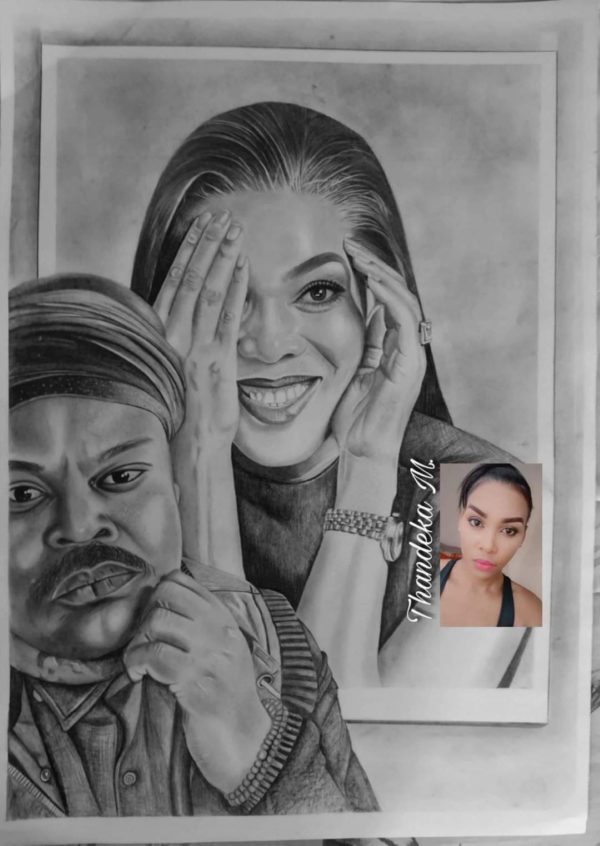 Here is the drawing that is on everyone's lips for the perfect interpretation of Connie Ferguson and Rasta created by a young artist from KwaMhlanga. Picture: Twitter

A young woman from KwaMhlanga, Mpumalanga, put Rasta to shame when she showed off that she can do a hundred times better than the painter known for sending the country into fits of laughter for his misrepresentation of his subjects.

Thandeka Mahlangu, 30, drew a painting of actress Connie Ferguson, that was originally done by Rasta. To top it off, she drew Rasta and both drawings resemble both subjects. So beautiful are the drawings that most social media users who saw the drawing are singing Thandeka’s praises.

“I am a self-taught artist,” she gushes. “Growing up I didn’t have as many friends so I used to draw cartoons to keep busy and I guess, that is how my gift got better,” she says, adding that after completing her theology qualification, she went to college to refine her talent and studied art and design in 2015.

Even though Thandeka stole the spotlight she says she has nothing against Rasta’s paintings.

“I love the way he expresses himself on canvas,” she says. “His work defines him as an artist and his use of colour is rich. His work is perfect because I believe art doesn’t really have to be picture perfect.”

ALSO READ: Rasta’s Meghan and Harry painting back in the limelight

Commenting about the portrait she did, she says, she titled it “In my Eyes” because it is her interpretation of his painting and above that whenever she shows off her paintings, people always advise her to teach, “Rasta a thing or two”.

She chose to do a drawing of The Queen actress because she inspires her. “Connie worked her way up and I believe I can do it as well,” she says. Asked if she will sell the painting, Thandeka says not now but when the time is right. “Right now I am building my brand as an artist and in a year or so, I will put together an exhibition where my collection can be sold.”

With talent like hers cropping up, does she advise Rasta to hang his paint brushes? “Whether people love it or not, Rasta must do it any way – it takes courage to do what he is doing.”

The Citizen reached out to Rasta to found out his sentiments about Thandeka’s drawing but he could not be reached. But it’s possibly because he is in KwaNongoma bidding the Zulu King, Goodwill Zwelithini, farewell in the best way he knows how. He is also likely to later set up at Menzi Ngubane’s memorial to take place on Thursday at midday at the Sandton Assemblies of God.