Growing up on the mean streets of São Paulo, Brazil, Jonathan Rodrigues fought not to get sucked into a world of gangsters and drugs. That ballet never topped his childhood list of career choices would be an understatement. However, steering clear of following his friends, some who had already gone down a dark road before even hitting their teens, his spirit eventually led him to a place of pirouette’s, fouetté’s and plié’s.

At just 10 years old Rodrigues watched his sister dance at her ballet class. He was intrigued by the steps and the turns. “Then she called me one day to try out a class, just to see if I like it or not. I didn’t think I would like it.”

But he did. He was fascinated by the turns and jumps and the rest was history. Rodrigues wanted to learn more, he wanted to earn a living from dance.

Having won the support of his parents, grandparents, aunts and uncles, the only thing left to do was convince his friends. But at first he lied. He told them he was merely watching the classes.

Much like Cinderella – in which he will play the role of her knight in shining armour with the SA Mzansi Ballet at the Joburg Theatre this month Rodrigues also had to hide.

“I used to lie to them, I used to say ‘no I am not a ballet dancer, I don’t do ballet.’ They never watched me dancing, so it was easy to lie. Many people in the country were also homophobic, resulting in even more difficulty,” he says. 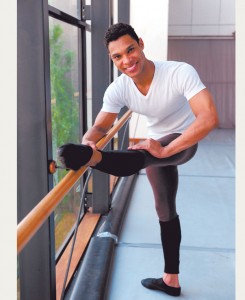 “In Brazil we have that problem that the only people who do ballet are girls or women, not men. “So I was very scared about what my friends were going to say about me dancing ballet.”

Rodrigues still pursued the art and was eventually awarded a scholarship by the ballet school that he attended. “After that, I was in the ballet world,” he smiles. “But my friends still used to say ‘you’re gay because you’re a ballet dancer and you are a woman’.”

After three or four years Rodrigues eventually plucked up the courage and invited his friends to watch him perform. They were amazed. “They were really proud of me because it’s not easy to see a man dancing ballet.” As time went by Rodrigues saw his friends going through the “bad moments in their lives”.

“They were using drugs and became involved on the streets. I saw that and I told myself that I don’t want that for my life. I carried on using ballet as a way out.” His repertoire included roles in Le Corsaire, La Fille Mal Gardeé, Giselle and The Nutcracker.

He was placed third in the 19Festidance competition in São Paulo, performing Basilio’s variation from Don Quixote. Earning a spot with SA Mzansi Ballet was his first job. Rodrigues describes his move to Johannesburg in 2011 as “amazing”. South Africa is much like home, he says. “It has the same vibe.”

Plenty of sleep is required before a big show, he says. That, coupled with a daily dose of vitamin B, keeps his body in top shape. And when a big performance ends and the final curtain call is over, what then?

“When the show is over, it’s the most amazing feeling. Sometimes I cry on stage because the audience appreciates the hard work put in.”