Miss SA trolls back with her own take on the #MissSAChallenge

The #MissSAChallenge has became one of the most talked about topics on SA social media. 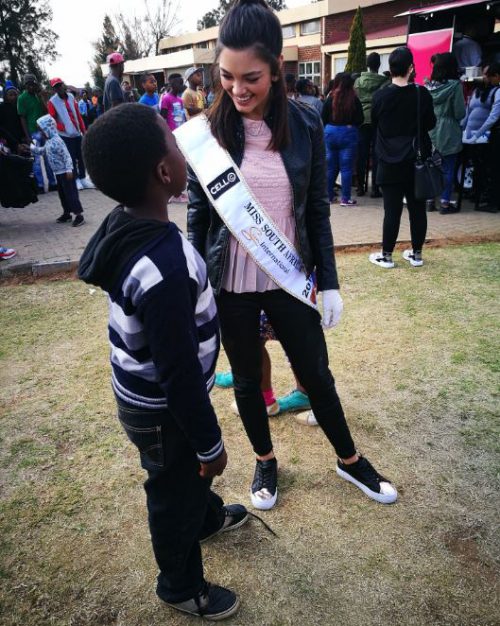 Social media was not impressed with Miss SA wearing gloves to a soup kitchen in Soweto on Wednesday.

She was accused of being racist, as she wore the gloves while serving food to black kids. They pulled out pictures of her interacting with animals and white kids without wearing gloves.

Nel-Peters saw the negative comments on social media and said she was “saddened” that her intentions were completely misunderstood.

“I just want to clear something out. All the volunteers wore gloves on site today because we honestly thought it’s the right thing to do, as we were working with food and we were handing out food to young kids.

“I’m sorry about that, I really hope that you can see my heart, and you can see the true intentions that went into today.”

However, Twitter thought it would be funny to start a challenge in response to Nel-Peters’ comment about purely wearing gloves to be as hygienic as possible. The #MissSAChallange, where Twitter users post parodies of Nel-Peters’ glove-wearing, has been trending on Twitter since Thursday afternoon.

Nel-Peters also participated in #MissSAchallenge by posting a video of herself challenging Twitter users to join her next week Wednesday for the Maslow soup kitchen drive:

#MissSAChallenge studying can be hard when you have to consider hygiene pic.twitter.com/QZSn8pbMlo

When your hands are feeling a bit dry but hygiene always comes first… ???????? #MissSAChallenge pic.twitter.com/UjHuV3CHNE

Miss SA accused of being racist after Soweto visit