Khumbul’ekhaya host, Andile Gaelisiwe found herself trending over the weekend after sharing the story of her traumatic rape on Twitter. 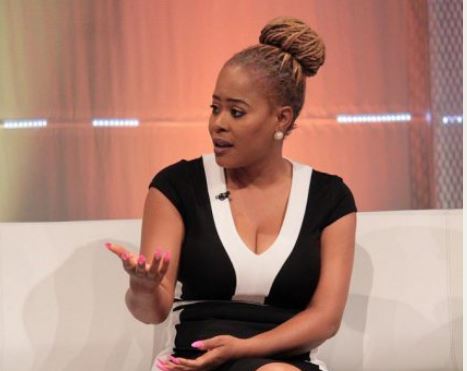 At a time when celebrities are lending their voice to the fight against gender-based-violence, Andile’s revelation was both saddening and motivating to victims who are too scared to speak out.

Her story was even more difficult to read when she revealed that her rapist was actually her father. Her outburst was triggered by a picture of her father which she came across on social media.

This was the first time she had seen the man in years and she expressed her shock at discovering that he’s still alive:

So in September days before my bday I got thee traumatic shock of my life when I saw this face on my timeline. Thread pic.twitter.com/CgVxzGRjdl

Andile’s father, whose name is Philemon Mofokeng, was actually trending on social media days earlier when Touch HD producer, Katlego Mohai tweeted a picture of him and asked for Twitter’s help in finding him. It turns out that Philemon is also Katlego’s father.

While Andile had nothing against Katlego’s pursuit to find her dad, she expressed her pain at discovering that while he was reuniting with one of his children, he was not willing to confront her and address their own falling out.

During her lengthy Twitter thread, she shared the heartbreaking story of how she had not seen her father since he raped her.

This was my biological father being looked for on this app. More traumatically he was my rapist. The last time I saw this man was when..

…he forced himself on me.So you can imagine my horror when I see people comment and some even joke re Khumbu and It broke me, I relived

The other reason is to say this man Philemon mofokeng is my father my rapist and my biggest shame and that until he makes this right….

… My tears will follow him to his grave. That’s my justice. Amen

Andile is a well-known activist in the fight against sexual assault and along with her acting duties, she supports victims of rape through her organisation, Open Disclosure Foundation.

Her story inspired many others on Twitter to share their experiences and the actress was sympathetic in her response.

Although it’s unclear if Philemon is on social media, Andile left a message for him after she had shared her story:

Philemon Mofokeng I didn’t know u growing up when I found you, u hurt me deeply. I never called you Dad but my rapist pic.twitter.com/VMUlBqhYmo

Ndileka Mandela: My ex-partner raped me