After meeting his dream girl on Boer Soek ’n Vrou in September last year, farmer Niel went down on one knee this weekend and she said yes! 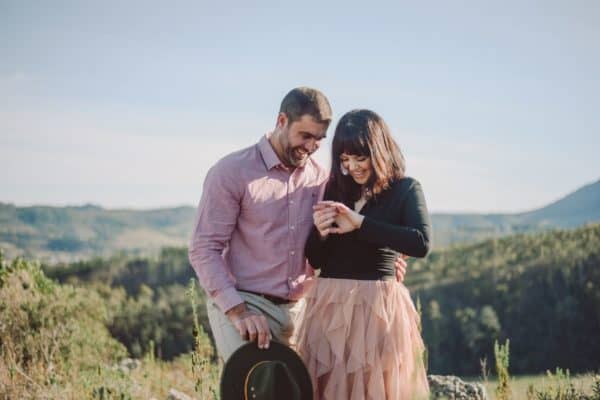 While farmers in the upcoming season of Boer Soek ’n Vrou have been revealed and possible partners are writing up a storm to enter, fruit farmer Niel Bruwer has already asked his match, Chereze Maree, to marry him.

Niel says that the emotions were running high during their photo session with Inecke Photography –  the ideal romantic cover-up for his proposal at the Stellenbosch-based Lanzerac Wine Estate.

“The emotions were just too much,” he says. Chereze, who is from Hopefield, was just as overwhelmed and Niel says that in between tears of joy, she was at least able to say yes.

The Boer Soek ’n Vrou couple met while shooting the reality programme in September last year and have been together for nine months. Niel says: “They say you just know.”

He knew Chereze was the one for him when she stood by his side through many life changes, including career changes and moving. During these trying times, “she was always exactly the same person.”

Niel adds: “She handled everything like a pro and she was just always there. That was just one of the signs.”

He says that they understand each other on many levels and that the fact that they have both been through difficult times makes them a perfect fit.

According to Niel, there are two things that they will need to keep in mind when planning their wedding: Covid-19 and his job. He says that they are aware of the talks of a fourth wave and that he will busy at work until December. They hope to get married either in December 2021 or April 2022.

READ: There is still time to write your letter to enter Boer Soek ‘n Vrou 2022

*Make-up for the photo session was done by KlaraGilbert Makeup Artistry.