The crown could fit S’manga today

History has proven that KZN horses who relocate to Kimberley tend to flourish. Muzi Yeni, the “king of sand” has been flying the South African flag in Greece and will miss today’s Kimberley meeting.

As a result, the Corrie Lensley yard will be without their main jockey and have booked champion jockey S’manga Khumalo to ride for them, making this partnership one to follow.

The partnership kicks off in Race 1, a Maiden Plate over 1600m when Lensley sends out Elysian Fields. This gelding turns out in his first run for the stable after moving from Duncan Howells’ yard in KwaZulu-Natal in February.

History has proven that KZN horses who relocate to Kimberley tend to flourish. Such could be the case for this three-year-old.

He is the best handicapped runner in the race, jumps from draw No 10 and shoulders 60kg which shouldn’t be much of a disadvantage. His first run over 1000m when second behind Phantom Rock is the closest he’s ever been to winning so he should have a big say here.

While Khumalo has a full card of rides for the 10-race meeting, it is perhaps best to ignore his rides in race 2 and 3 where his mounts have shown little form, and wait for his ride aboard Miesque’s Secret in Race 4, a Maiden Plate for fillies and mares over 1600m. This filly has proven rather costly to follow but that could change today. She jumps from draw No 9 and will carry equal weights with the field at 60kg which should increase her chances.

Khumalo makes for great Eachway bets in Race 5 aboard King Of Cant and Race 6 on One Cool Cat.

Lensley and Khumalo hold a strong hand on Ahead Of Traffic in the main event, the Flamingo Park Handicap (Non-Black Type) over 1800m. He impressed in his last run when 7.50 lengths clear of the field. He jumps from draw No 1 and shoulder a modest 54kg – respect.

Khumalo then rides Lady Duchess in Race 9, a FM 71 Handicap over 1600m. She loves this distance and won easily last time. She jumps from a bad No 12 draw and will shoulder a heavy 60kg however her class should see her through.

To close off the day Khumalo is aboard Roy’s Dispren in Race 10. This Windrush gelding wasn’t disgraced last time out and could well return to winning ways. He jumps from draw No 4 and will shoulder 59kg. 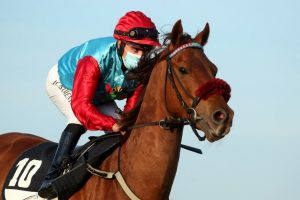