This Tiger Ridge mare has class and relishes the Turffontein Standside 1600m so should see punters through in the R6- million Pick 6. 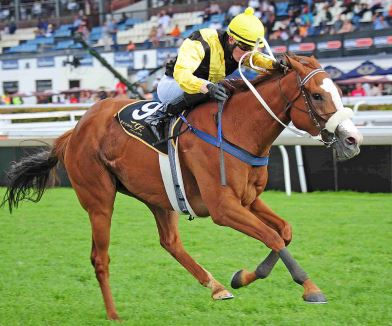 RED HOT. Mike de Kock is in devastating form at the moment and the stable's runners could dominate on Summer Cup Day. He offers the banker in the carryover Pick 6 in the form of Nother Russia in the Ipi Tombe Stakes.

At first glance Nother Russia is the lone Pick 6 banker on a day when it could be lucrative to win TAB’s most popular exotic bet.

There is a R1.7-million carryover to the Pick 6 and TAB boss Vee Moodley estimates the pool will hit R6 million. The large “bonus” means the bet will pay much more than would normally be the case and, with the other legs seeming to need  multiple horses, only punters with information not known to the general public will be brave enough to banker elsewhere. There have been plenty of racecourse whispers about horses like Gavin van Zyl-trained Bella Sonata and Geoff Woodruff-trained Al Danza having the potential to give Nother Russia a fright.

And at the weights Bella Sonata must be a huge runner if her poor run in the Peermont Emperors Palace Charity Mile is forgiven. Al Danza might only be 0.5kg (the equivalent of 0.50 lengths) better off with Van Zyl’s runner for a fivelength beating in her penultimate start, but she had excuses in that race and has apparently improved immensely for her two runs following a layoff.

Those pleading caution will also point out that Nother Russia is probably still not 100% fit because trainer Mike de Kock has Grade 1 plans pencilled in and this race is a stepping stone to either the L’Ormarins Queen’s Plate (the stronger possibility if she draws well) or the Cartier Paddock Stakes and then the Sun Met. Will it matter that her trainer has kept something in reserve? Personally, I don’t think so. Taking into account her bigrace aspirations –  races in which she will take on the likes of Horse of the Year Legal Eagle and backto-best Argentinian star Hat Puntano – this Grade 2 race should be well within her compass.

She seems to tick every other box, too. She romped home in a 1400m Pinnacle race at Turffontein on 9 November following a layoff, winning much easier than the 0.50-length margin suggests. She hails from a stable that is in red-hot form, loves her jockey Craig Zackey, is well drawn, has earned her big weight and relishes every metre of the Turffontein 1600m. And star Ipi Tombe was one of De Kock’s favourite horses of all time, so winning the race named in her honour is something the world-renowned trainer loves to do.