Surcharge is loaded with talent but this will not help to beat the No 14 draw. All To Come with Peppermint Tea and Legal Eagle looks a sound bet. 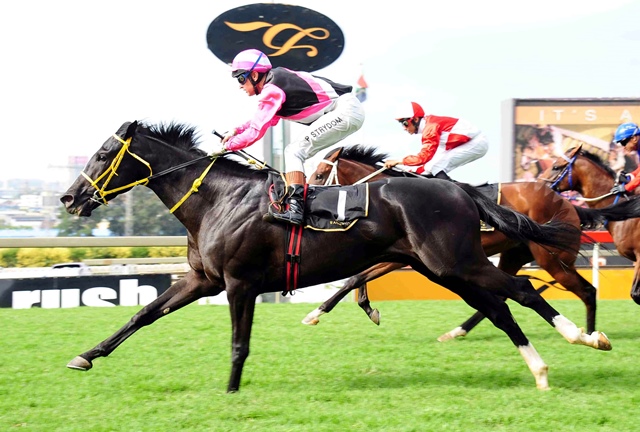 DRAW CONCERNS. Piere Strydom will be riding Surcharge in today’s R2-million SA Classic over 1800m at Turffontein but will need luck to overcome his No 14 barrier position. Picture: JC Photographics

We are right in the middle of the Highveld autumn season and today we see the running of the R2-million SA Classic (Grade 1) over 1800m on the Turffontein Standside course.

It is so nice to get on to a real quality horse like Surcharge for a race of this calibre but it is so frustrating to land such a shocking draw which takes you out of the play.

I hear so many people say that if anyone can win from a wide draw it is me. That’s all very flattering but what some people don’t understand is that there are courses where you can overcome a bad draw and there are horses, if they jump well, who can help you to beat the draw. Surcharge is not one of those horses.

As I have said before, the biggest factor for me is to get some luck and I’m grateful the owner and trainer of Surcharge both understand that. Unfortunately luck is not something you can predict.

Everyone can see he has lots of ability but there are a couple of young three-year-olds who have shown on current form that they are on par with him.

Therefore, taking the draws into account, consider Mike de Kock’s Like A Panther, Noble Secret and Royal Crusade for the Place Accumulator. There has been a lot of jockey-room talk that Like A Panther is the best of the De Kock trio.

For the Pick 6 we have to add in Surcharge and also Roy’s Had Enough and Majestic Mambo.

The Wilgerbosdrift SA Fillies Classic is the other three-year-old feature on the day and I can only see three horses winning it. My first choice is Folk Dance who came off a lengthy rest in the Fillies Guineas. She also had a bad draw to overcome and had no luck in running. Yet she still ran a very creditable race.

For the PA I’m backing her up with Silver Thursday, as the only horse who I think can beat her, Takingthepeace, has a shocking draw to overcome. However, include Takingthepeace in the Pick 6 and if you’re looking beyond those three then consider Cashel Palace, who’s got a nice draw and is bred to go the distance.

I ride Radiant Splendour who is held on form but at least has a good draw.

Race 1 is a Maiden Plate and you could start the meeting off with a winning bet on Peppermint Tea but she is at short odds. It could be worth taking an All To Come with Legal Eagle in Race 6 who also looks hard to beat.

Race 2 is another Maiden Plate but we have a number of lightly raced horses which makes it a bit trickier. I’m leaning towards Silvez, Pretty Penny and Milesende so Swingers and Trifectas are the way to go.

Race 3 is the start of the Place Accumulator and you can banker Dagmar who won her only start and that was in a feature race. She did beat Urban Oasis who is better off at the weights but Dagmar surely has to make more improvement.

Her only danger is Celtic Sea who just got beaten on debut and she probably has a lot of scope for improvement as well. As Sean Tarry has a good line with Urban Oasis and Celtic Sea it could be wise to watch the betting.

In Race 4 we have another PA banker in Bold Eagle. He won his last start in a feature race with ease and he could be even better this time.

As these are young two-year-olds and are unexposed, there is a possibility of another horse beating him. Others to consider are Green Haze, Dewali and also take note of Zaahed, the unraced runner from the Mike de Kock yard.

Race 5 is the Man O’ War Sprint and as this is not a handicap it favours your highest merit-rated horse. That goes to Mustaaqeem and the jockey-room talk is that he is doing very well on the training tracks and that makes him a PA banker, and possibly even a Pick 6 banker.

On his last run there are many horses with chances and they are Pera Palace, my ride Down To Zero and Pinnacle Peak who has beaten my ride before. For the Pick 6 all have winning chances but I believe Mustaaqeem has come on since his last run and should have the edge over this field.

Race 6 is the Grade 1 HF Oppenheimer Horse Chestnut Stakes and as mentioned earlier, Legal Eagle should be very hard to beat. He meets most of his opponents at level weights which gives him a massive advantage and on form he’s got the field well held. He has a good draw and according to the jockey-room talk his work is exceptional. Banker him in all bets.

Race 9 is the Listed Jacaranda Handicap for fillies and mares and a lot of these have similar form lines. You could quite easily consider the field for the Pick 6 but for the PA I’m leaning towards Al Danza, Bi Pot, Sabina’s Dynasty and Pennington Sands.

I ride Sabina’s Dynasty who likes to be given a patient ride. Unfortunately two starts back when I rode her there were only six runners in the field and the race did not work out well. She is now drawn No 1 and the way she races it will enhance her chances quite a lot.

Race 10 is the Caradoc Gold Cup and once again it’s a conditions race and therefore the best handicapped horse has a big advantage. This time that honour goes to Tambalang and on collateral form she has the field well held. It is her first start over the distance so there is some doubt as to whether she will see it out.

The dangers could be stable companion Witchcraft and Kitty’s Destiny. I ride Malinga who is not well handicapped and not sure to stay the distance but, on the positive side, at least he is a fit horse.

Race 11 is Maiden Plate and there are a number of runners with chances. My first selection is Liberado who can make more improvement and has to be the horse to beat. He may have been well beaten last time but the winner, Ghost Town, has subsequently come out to win again.

Race 12 is a fillies’ handicap over 1400m where a good draw will enhance your chances. Therefore, taking everything into account, I am leaning towards Paree, Seattle Tango and Effortless.