Seasoned Lerena takes on the world

Lerena got the South African team off the mark in the first challenge race on Friday at Fairview and finished second overall on the day to Yeni. 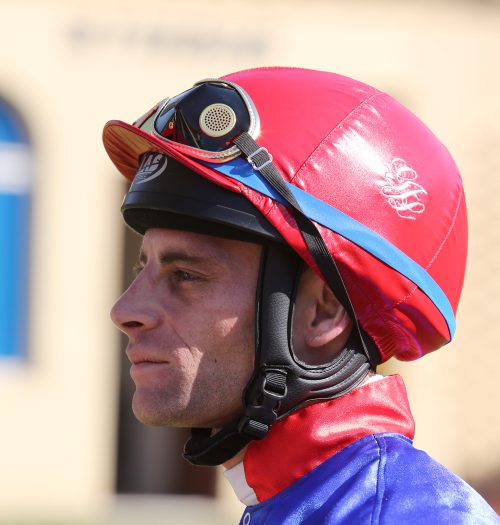 Taking on some of the best jockeys in the world is not a new experience for Gavin Lerena. He has competed in several jockeys’ tests during his 14-year riding career and captained the winning South African side in the Air Mauritius International Jockeys Challenge last year.

The 31-year-old is in the South African team again for this year’s Challenge. The first leg was staged at Fairview on Friday and Leg 2 takes place at Turffontein on Sunday.

Led by champion jockey S’manga Khumalo, who is ably supported by Lerena, Anthony Delpech, Aldo Domeyer, Muzi Yeni and Grant van Niekerk, the South Africans head into the home stretch 52 points ahead of the international team. Lerena got the South Africans off the mark in the first challenge race on Friday and finished second overall on the day to Yeni.

It’s the fourth time Lerena has represented South Africa in a jockeys’ challenge on home soil. First time up was in 2009, when he took individual honours in the Challenge and won the Bronze Saddle.

“I’ll never forget the day I won the Bronze Saddle,” he said.

“I was a late replacement, which made it all the sweeter. Another time I ran second to Joao Moreira (arguably the best jockey in the world at present and currently plying his trade in Hong Kong), which I was quite chuffed about.”

His win in the 2014-15 jockeys’ championship saw him captain the South African side last year.

“It’s fantastic to ride against some of the best jockeys in the world,” he said, noting it is not easy to outwit the likes of world-class Frankie Dettori, who is captain of the Internationals this year, or his team-mates – hugely experienced Pat Cosgrave, Robert Havlin of Scotland, Fergus Sweeny from Ireland, and back-from-retirement Englishwoman Haley Turner.

His SA Jockeys’ Championship win also saw 31-year-old Lerena represent South Africa in an international jockeys’ challenge in Hong Kong last December, as well as the Shergar Cup at Ascot in August, when he won two races on outsiders.

“We went into the Hong Kong challenge as the underdogs and came out on top,” he said. “As for Ascot, it was amazing. England is a horseman’s haven and English racing is terrific. The two wins made the visit all the sweeter.”

His win in the Hong Kong test garnered him a short-term contract to ride in Hong Kong, which fulfilled one of his dreams.

“When the invitation came through to ride in Hong Kong I was elated. I was really thrilled when they extended my contract from two months to four.

“It was very tough. I didn’t get the chances I expected but I really enjoyed it and learnt a lot.”

In spite of his four months away, Lerena still managed to finish 11th on the National Jockeys’ Log last season. This season he is fifth on the table and has the highest winning strike rate of the top five riders (23.32%).

His form on Charity Mile Day at the beginning of the month was remarkable. He won four feature races, including the topliner on the card. Lerena, who has also ridden in China and Dubai and has ridden 1 400-odd winners in South Africa, Mauritius and Zimbabwe, is not depending on setting the track alight at Turffontein tomorrow because “I’ve got some deep draws to contend with, but I’m hoping one of them can pop up”.

As for Master Sabina in the R2 million Sansui Summer Cup next Saturday, he says he is “looking forward to riding him in the Cup, which is always a great race and one I really enjoy”. He is hoping for a decent run.

“He’s doing well, his preparation’s going nicely, he’s fit and healthy and I think trainer Geoff Woodruff has done a fantastic job with him. He’s certainly in with a chance with a nice weight of 56kg.”

It seems unlikely he’ll go home empty-handed from either race meeting, so have a good look at his mounts and have a few rands on the ones you prefer.