Tarry holds the keys to outcome of Nursery 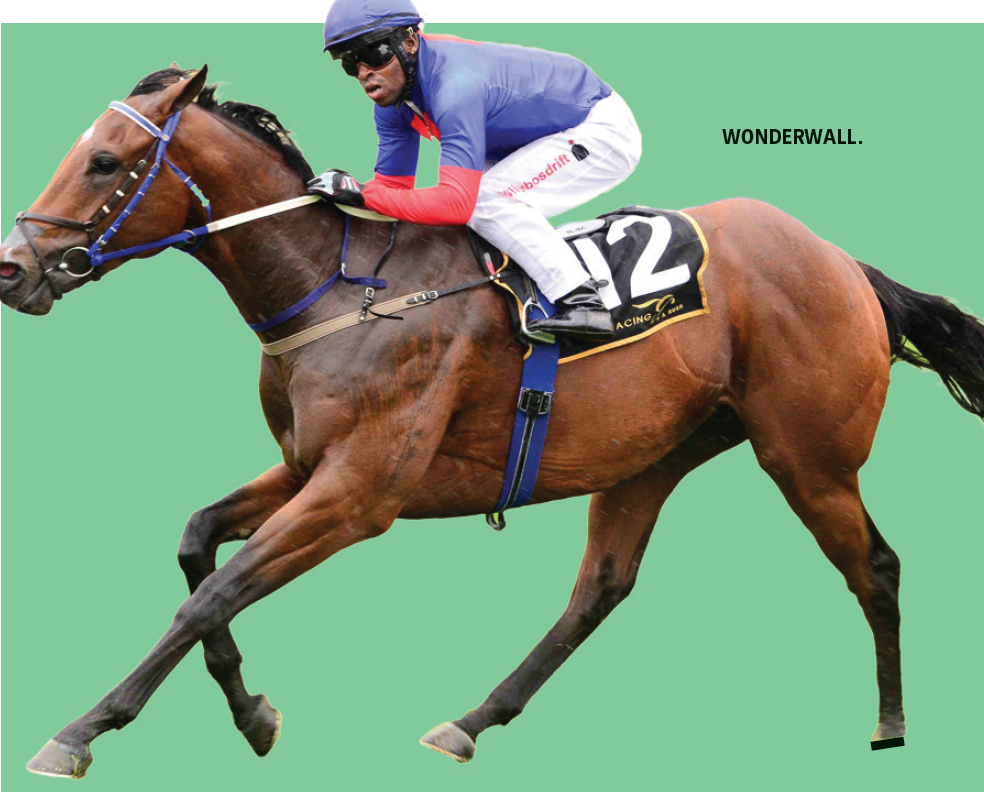 WONDERWALL: THE COLT MAY HAVE MORE SCOPE THAN BARRACK STREET

Jockey bookings give li_ le idea of which of trainer Sean Tarry’s SA Nursery runners is better fancied by the stable because they will both be partnered by champions.

The two colts have met before, in a 1200m feature at Kenilworth in January, when Wonderwall was beaten only a head by Bold Respect with Barrack Street five lengths further behind. That was both runners’ second career start so improvement was expected.

They did not let the side down with Barrack Street winning his next two races in feature events to bring his tally to three wins from four starts. Wonderwall ran only once back from the Cape and he trounced Naafer by 4.75 lengths.

So there’s a conundrum who will do better and their trainer has shed little light on the manner.

He said: “Barrack Street is very well. We know how to manage him now.

“Wonderwall had a very impressive win. He’s a very good horse and has got better and stronger. He’s got to have a chance.”

My money would be on Wonderwall who might have a bit more scope for improvement than his stable companion.

Trainer Mike de Kock also has a pair of runners in the race, Mustaaqeem and Naafer. Both shed their maiden tags in impressive style recently and will have supporters.

Anthony Delpech will ride Naafer, but Mustaaqeem will improve with the experience of beating Coastal Torrent by 7.50 lengths over this course and distance in his debut. He has been made 12-10 favourite.

Boatswain was beaten only 2.15 lengths by Barrack Street in the Protea Stakes over 1100m last time out and, although he will carry 5kg more this time, he could make his presence felt.

Daring Diva has won all three of her races to date and Barend Botes’ star turn could make it four in a row when she lines up in the R400,000 SA Fillies Nursery (Grade 2) over 1160m.

She beat male contemporary Laurent Du Var in her 800m debut and followed up with a good win over Green Plains in a 1000m sprint next time out.

Then she had li_ le trouble accounting for Outlander in the Ruffian Stakes over 1000m at Turffontein in March.

The only chink in her armour is the distance, which she tries for the first time. Kissable was not striding out in the Ruffian Stakes and dropped out from the lead to finish stonelast.

She was blowing  after that race and might have had the respiratory infection plaguing the Highveld at that stage. She had won both her previous starts, including beating La Bella Mia by 7.50 lengths in her second career start. If back to that level of form and enjoying this longer distance, which she tries for the first time, she will go close.

Tarry-trained Green Plains, Won her debut before finishing second to Daring Diva second time out and then came out to win the Pre_ y Polly Stakes by a fair margin. She should be better over this distance and run well again.

Others to consider are Silver