I can’t see it changing much and therefore horses who have speed but are suspect over the distance should benefit from it. 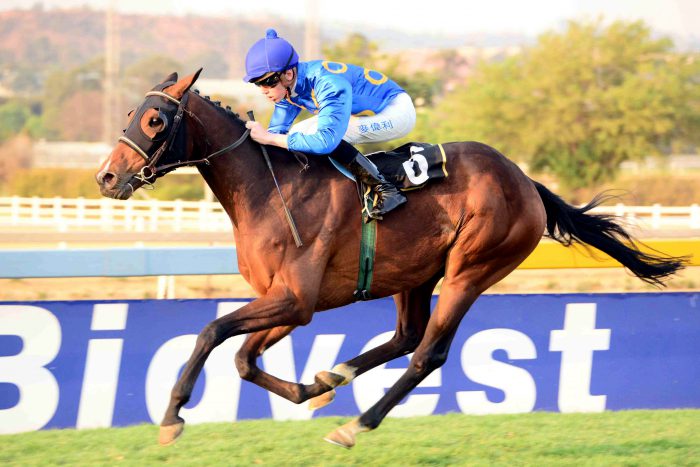 We are now in the middle of the Cape summer season and unfortunately there has still been no rain and the track is running fast as the underfoot conditions are quite hard.

When I rode there two weeks ago it was quite tricky as the track was fast but we had this strong headwind and it was amazing to see certain horses going a good gallop and still winning.

I can’t see it changing much and therefore horses who have speed but are suspect over the distance should benefit from it.

Next week we have the L’Ormarins Queen’s Plate. It is run at weight for age so that should suit Legal Eagle to a tee. With the current conditions the way they are it looks like the Sun Met could also have a lot of factors in Legal Eagle’s favour.

Unfortunately my ride, Edict Of Nantes, has been sold and will be moving to Hong Kong so sadly I will miss out on potentially winning a Queen’s Plate and a Sun Met. Even Anton Marcus was considering swopping rides if Edict Of Nantes ran a cracker in the Queen’s Plate so even he was undecided.

Racing is on the Standside track at Turffontein today and Race 1 is a Maiden Plate and there are two runners I like. Coastal Torrent has got some decent form behind quality horses. Unfortunately we don’t know much about his fitness as he has not raced for a couple of months.

The other big runner is State Trooper, who ran second in his only start and will possibly improve. There are other lightly raced horses but you might have to keep an eye on market moves for some well-bred unraced horses.

Race 2 is another Maiden Plate with Count Kournikova possibly the horse to follow. She was beaten just over a length in her only start and as that form has been quite strong she could take a power of beating. Unfortunately she was found to be not striding out. If she was striding out she would have been a winner already but on the flip side, if she does not stride out again she could be beaten again.

Her dangers have to be Schippers and Eleni but there are a few well-bred unraced horses who could be in with winning chances.

I’m riding Saragon who ran fourth behind a decent filly in Shufoog. But she was well beaten so I’ll be hoping she will be able to make enough improvement to be competitive in a quality race.

Race 3 is another Maiden Plate and is over 1400m so you have to take the draw into account as an inside barrier is a massive advantage. Of the raced runners the form does not look anything special so keep an eye on the unraced entries as they could be the ones to follow. They are Mutrib and Silver Spine. We have no idea how good they are so for the Place Accumulator include Agent Kay and Romano. The other horse who could be competitive is Greenwood Drive but he has a shocking draw to overcome.

I’m riding Left Hook who has only had one run so I’m hoping for improvement but from a very wide draw we will have a tough task.

Race 4 is another Maiden Plate over 1400m and the draw is once again important. The two main ones to follow must be Amanika and Get Your Groove On. Other potential runners are Ration My Passion and Fragrant Miss but they don’t have the best of draws.

For the PA go with Get Your Groove On, Amanika and Ration My Passion and for the Pick 6 add in Fragrant Miss.

I’m riding Ava Adore who has poor form and I will be hoping for some improvement.

I rode Diva Faustina in her last start. She was drawn No 1, had the run of the race and never went on with it. There were no excuses and I wish I could work out why she ran so poorly.

Race 5 is quite a tricky affair as there are quite a number of runners with form, but with the scratching of Zouaves, Shukamisa looks the runner to beat. He should be good enough for the PA but for the Pick 6 consider the field.

I rode Count Tassilo last time. He definitely found the going too firm and was not travelling well. With some rain he could improve quite a few lengths.

Race 6 is a fillies’ handicap which often are quite tricky but on this occasion Spring Wonder looks a possible banker. We have apprentice Dylan Lerena claiming 4kg so she should have the beating of this field with that added advantage. She should be a PA and Pick 6 banker but if you want to add another runner in the Pick 6 put in Alileo.

Race 7 is the Grade 3 Lebelo Sprint and some of the best sprinters in the country will be lining up. There are some hard knockers but one might have to lean towards the young improvers and they are Mujallad and Alfolk. Those two must go into the PA but as this is a very competitive race consider Angel’s Power. For the Pick 6 add in The Thinker and Rivarine. If you look past those there are many with winning chances.

I ride Talktothestars who ran in Durban six days ago finishing second. Hopefully that trip has not taken too much out of him but he has a lot of weight and coming back to 1000m is not in his favour.

I will be happy with a place but a win would come as a wonderful surprise.

Race 8 is a fillies’ handicap over 1800m and is very open. Consider Hatfield Square, Emerald Bay and Faraway Island for the PA. For the Pick 6 include Cold Cash although she has not raced for a few months.

I rode Dawn Flight last time out. She appeared to need that run but might still need one more to reach peak fitness.

I ride Bright Bronte who has been well beaten of late so I just hope she can earn a stake.

Race 9 is a Pinnacle Stakes and your highest rated horses should come out on top. That honour goes to Witchcraft. She finished third last week so she should be super fit and probably is the horse to beat. Unfortunately she has a bad draw.

Her biggest danger is probably to second highest rated horse and that is Fortissima. Those two stand out on form and should be good enough for the PA. You could even go light in the Pick 6 with the two but another possible inclusion could be Go Direct as he’s been running in feature races.

I’m riding Samurai Blade who is not well handicapped but perhaps over this distance could show improvement.

Race 10 is a handicap and it is often tricky to find winners over this marathon trip. My choices are Ali Bon Dubai, Desert Sunset and Eastern Pearl if he produces his best form.

Ali Bon Dubai has a good draw and is consistent and if you need to get out he looks the one to go with, and if you’ve had a big win you could increase your profits.

I ride Fortune Fella whose form has not been inspiring of late but last time from a poor draw we could not get in and he was caught wide the whole way. Maybe he can improve enough to run a place.

Greeff and Cheyne to dominate at Fairview

Would you like to place a bet on the horses? Click here to get started in 3 easy steps.