Neptune’s Rain and Sommerlied could spoil the party. 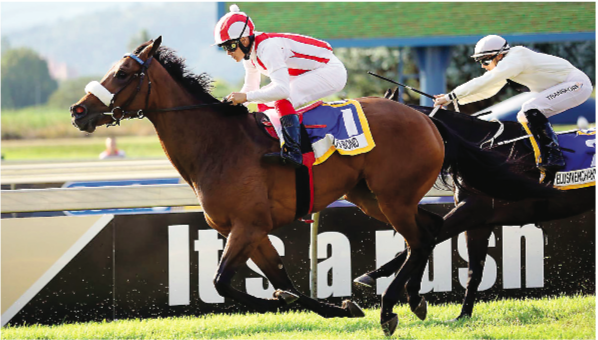 DOUBLE SEEKER. Jo’s Bond will be looking to repeat her win of last year when she lines up on Sunday for the Listed KwaZulu-Natal Stakes over 1000m at Sco sville. Picture: Gold Circle

Justin Snaith-trained Jo’s Bond is long overdue for a ninth career win and that could come at Scottsville on Sunday when she teams up with top Western Cape jockey Grant van Niekerk in Race 7, the R150,000 KwaZulu-Natal Stakes (Listed) over 1000m.

Her last win was in this feature event last year when she scored fluently despite a slow start and being hindered by a slipped saddle. She was not disgraced in her subsequent five runs when carrying big weights in Graded events the best of which was a fast finishing 2.75-length fourth to champion Carry On Alice in the 1200m SA Fillies Sprint (Grade 1) at Sco sville which she followed up with three unplaced runs at Kenilworth.

This five-year-old returns to Scottsville primed and ready after a 78 day break and will be tough to beat this time when rac- ing over her most effective distance.

The three-year-old has yet to finish out of the money at this course in six runs two of which were wins. She was a smart winner in her penultimate outing at Greyville and then followed up with a fast finishing third in a minor feature event over 1000m at Scottsville.

The booking of top flight Marcus would infer the filly is ready after a three month layoff.

Do not hastily dismiss Dennis Drier-trained five-time winner Sommerlied (Sean Veale) after three unplaced runs, as she was overmatched in Graded events at Kenilworth. The four-year-old racked up three wins in a row in her previous three runs, and to strengthen her claims is unbeaten in her two outings at this course.

Also to be included in Pick 6 and Jackpot bets is Drier-trained Vine Street Star with apprentice Diego de Gouveia aboard. This four-year-old posted a fine 1000m double at the Greyvile Polytrack but can be excused for being unplaced next time as she was in need of the outing a er a rest. This she confirmed in her subsequent outing when coming from last to run a head second over the same course and distance with De Gouveia up again.

Next best are Statute, Captain’s Girl and Vision To Kill.