Seven-year-old gelding Royal Zulu Warrior pulled off a shock win in the Peermont Emperor's Palace Charity Mile at the Turffontein Racecourse this weekend. Excitement was in the air on Saturday as celebrities, socialites and families descended on the racecourse.

The Citizen’s Killua Castle ran a courageous race and finished third, to the delight of linked celebrity Kerry McGregor and charity the Animal Anti-Cruelty League. 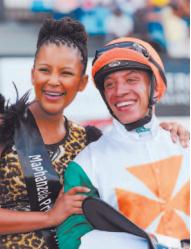 Royal Zulu Warrior was linked with TV celebrity Gerry Elsdon, who exclaimed: “With a name

like Royal Zulu Warrior how could he not win!”

This was only the 11th start in three years of racing for Royal Zulu Warrior and it was his sixth victory.

Jockey Karl Zechner said afterwards: “I rode him when he won first time out by nine lengths, so I knew.”

The Peermont Emperors Palace Charity Mile brings together top racehorses and famous people in aid of 16 charities that each took a share of the R550 000 pool.

The race is one of the highlights of a blockbuster list of race meetings at Turffontein in November including the ACTS International Jockeys Challenge on November 16 and the Sansui Summer Cup on November 30.