The Trippi filly Nala runs in Race 6, a FM 76 Handicap over 1000m on the Greyville Pollytrack. 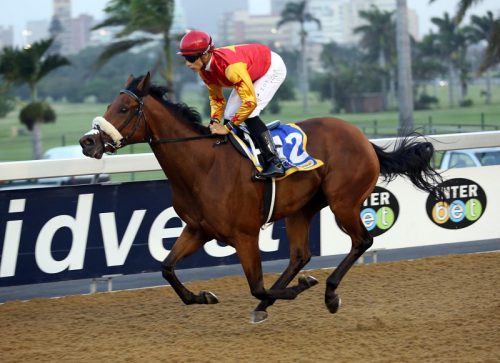 Trainer Johan Janse van Vuuren has been raiding KwaZulu-Natal with success this season and has a couple of runners at Greyville today we need to keep an eye on.

The Trippi filly Nala runs in Race 6, a FM 76 Handicap over 1000m on the Greyville Pollytrack. This lightly raced three-year-old has won twice in just three starts with both wins coming over this course and distance.

Nala bled on debut and after showing pace dropped out to be well beaten on the turf over Vaal 1200m in September 2015.

Rested until April last year she tried the Polytrack and was a heavily backed and very easy maiden winner over At Variance.

Nala was next seen out in August where once again she found betting support and won a nice race.

She managed to just hold on to beat Anime. That rival does have ability so we may not have seen the best of Nala yet and in Brandon Lerena she will be given every chance of winning once again.

The other Van Vuuren runner is Readyforyourlove in Race 8, a FM 82 Handicap over 1900m.

This Australian-bred filly was only run out of it late on the turf at Turffontein over 2000m last time out so could be better-suited to this slightly shorter distance and this surface could be kinder to her.

Local rider Warren Kennedy has been entrusted to the Big Brown filly.

Hopefully punters can get off to a good start with Chicago Beat in Race 1, a Maiden Plate over 1400m.

This Kegan de Melo-ridden four-year-old has looked unlucky not to have got out of the maiden ranks.

In both of his last two starts Chicago Beat has been finishing strongly so the step up to 1400m could bring out the best in him.

Two other runners on this card who could be of some value are Lunar Tide in Race 3 and Mythical Magic in Race 4.

Lunar Tide tired late last time on the turf in her latest and could do better back on this surface.

A lot of the Sean Tarry-trained runners have improved when switching to this centre and Mythical Magic was a brave winner of her latest start. The two points she received in penalties may not be enough to stop another win from the Silvano filly.