Top soccer stars share their tips for the red carpet

Behind the game of soccer, learning tips and tricks on grooming and looking the part, even when they are not playing. 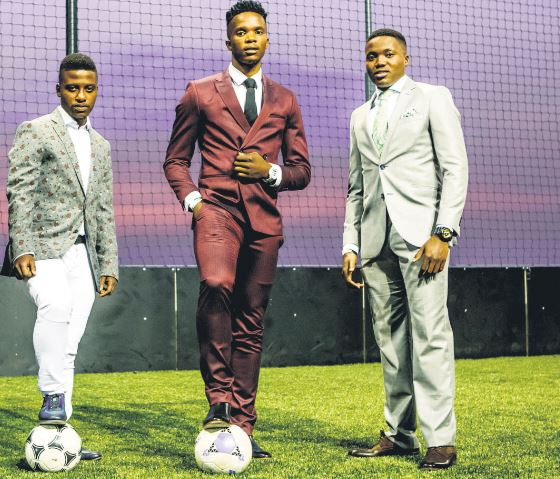 This is thanks to menswear brand Carducci and designer Abu-Baker Frizlaar ahead of the many red-carpet events which the trio have been invited to as honoured guests.

Having graduated from the Ring of Steel soccer academy run by Nedbank, the players have gained a vast amount of knowledge on the importance of branding themselves, maintaining good rapport with the media and staying out off the front pages of the  tabloids.

For Nkwana and Chikohwa, having obtained qualifications from the University of Pretoria has helped break the stereotype of the up-and-coming soccer star.

While many argue it’s not the  suit which makes the man, it is undeniable that a man in a suit demands attention and a man in a tailor-made one even more so.

Leading men’s suit brand Carducci expert Frizlaar is among those who helped shape and teach the young players about the importance of image and looking good.

Frizlaar has a few tips on how to find the right fitted suit to match any personality.

As we know, they are young, so we try to make them look trendy and not too stiff and formal.

2. What has been the biggest challenge for you during the process of grooming the players?

The challenge has been to ensure we get to do their body measurements and fittings in order to get them a tailored outfit.

3.  What are some of your tips to follow when planning an outfit for an event such as the PSL Awards?

In order to stand out from the crowd, ensure that you wearing a well-fitted tailored suit and that your combinations compliment the whole look.

For any professional soccer player, the PSL awards are among the highlights of their year.

It is on this night that players can swap their soccer boots for a well-fitted suit and walk the red carpet.

They can put behind them all those sweat-dripping extra times, yellow cards and goals which they accumulated over the duration of the league season.

Cape Town-based Bongani Mbuli earned his first invite to the auspicious event this year, where he too could mingle among his peers.

This being his debut at the awards, Mbuli sought the help of experts to help him execute a well-groomed look which would guarantee a lasting impression.

Haircut and trim. Staying true to yourself and your look is key and for Bongani Mbuli, his signature fade haircut is one of his trademarks. Prince did his thing and gave Mbuli a faded cut with a high top that he would then ruffle up at the end.

Wash and Condition. Healthy hair is always a good thing, which is why Prince gave our soccer player a deep conditioned wash and rinse to give his hair that natural glow and texture even after the awards ceremony.

Brow Threading. The latest trend among soccer players is found in their cool and edgy brow shapes which Prince achieves through a threading process. Unlike most threading techniques, Prince and Mbuli first discuss the shape and style which would best suit the night. Though it may look painful, Mbuli seemed rather at ease.

Facial shave and trim. Even though the beard is still in fashion, Mbuli chose to rather look clean shaven for his special night on the PSL red carpet. With some help from Prince, who gently trims off the sideburns and softens Mbuli’s moustache, he ended up looking young, slick and well groomed.

Gentleman’s scent. To top off the grooming experience, Mbuli sprayed himself with the new limited-edition CK-All fragrance which ensured him the confidence of stepping out in style, class and comfort.