Cryolipolysis: can freezing fat help you get rid of your saddlebags?

One of the latest trending techniques in aesthetic medicine, cryolipolysis, or fat freezing, is used to eliminate localized fatty deposits on the stomach, thighs or saddlebags. 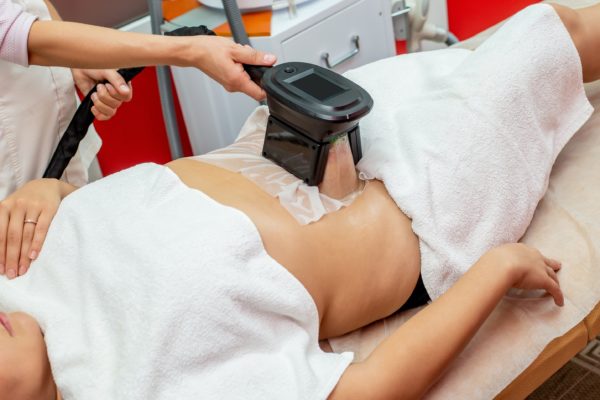 Painlessly and in record time. Dr. Thierry Van Hemelryck, plastic surgeon and president of the French Society of Aesthetic Plastic Surgeons (Sofcep), tells us more about this treatment that is gaining popularity worldwide.

American academics from Harvard University are essentially at the origin of cryolipolysis, when several years ago they discovered that subjecting fat cells to cold could lead to apoptosis — cell death.

You may be surprised to learn that the clinical study which showed that these effects could be reproduced with cryolipolysis machines was actually initiated following an observation made on children.

“These studies were conducted because researchers noticed that children who sucked popsicles in large quantities had a kind of loss of cheek fat, and this was confirmed with horse riders who, in cold weather,

had a reduction of fat on the inner side of the thighs,” says Dr. Thierry Van Hemelryck

So what is cryolipolysis?

The concept of cryolipolysis is quite simple.

The plastic surgeon or doctor makes an outline of the area to be treated (abdomen, inner knees or thighs, saddlebags), and then places some kind of suction cups on the said areas which, once the machine is running, will suck the skin and then lower the temperature to -10 degrees C, or even -13 degrees C, in order to kill the fat cells.

“It takes about an hour per area, keeping in mind that some machines can treat several areas at the same time. Then, we remove the suction cup.

As the fat is still frozen, it kind of resembles a lump of butter, which the assistant massages.

The fat melts little by little, and the fat cells are then eliminated by natural means,” explains the specialist.

He specifies that although it is not painful, the massage is the most delicate part of the procedure because the sensitivity returns progressively during this stage.

The treated area will be a little red throughout the day, and the skin more sensitive, but there shouldn’t be any pain. “When I bought the machine, of course I tested it first.

I did a round of cryolipolysis in the morning around my middle, and in the afternoon I worked. There’s no pain, and you quickly see good results.”

Cryolipolysis is intended for people who have localized fatty deposits. However, it’s important to be aware that it’s not at all a technique for losing weight.

One should not expect to see an impact on weight, nor on cellulite, only on the reduction of fat, namely manifesting in changes of one’s curves at the level of the hips, abdomen, and thighs, for example.

It also has an effect on shape and firmness, and there is also an impact on the retraction of the skin.

It’s also important to know that if there are too many areas to be treated or they are too large, it’s better to consider liposuction, if only because after a certain number of areas,

the treatment may cost more than liposuction would. “The ideal patient, for example, is one who is athletic but who cannot lose their small bulge,” emphasizes the specialist.

Why is there such a buzz about it?

The benefits of the cold have been known for thousands of years, but in recent years there’s been increasing excitement around techniques using its effects, whether in the fields of health or beauty.

Cryotherapy and skin-icing have been the talk of the town over the last few years,

while cryolipolysis seems to be on its way to becoming a new must-have treatment for body sculpting.

“It is perhaps due to the movement towards sustainable development, organics because there is nothing that is more neutral than the cold. Patients clearly perceive it as being more natural than other technologies.

Currently, we see that with our patients, there’s a desire for ‘softer’ techniques. All these regenerative medicine techniques find an echo in current society, because there’s a natural aspect,” says Dr. Van Hemelryck.

The treatment’s popularity can also be explained by its effectiveness and by the fact that, unlike with liposuction, there is no general or local anesthetic and no hospitalization.

Moreover, one session — or two depending on the areas or effects desired — can be enough to get rid of these fatty masses.

What are the contraindications?

Dr. Van Hemelryck outlines that cryolipolysis is contraindicated for people who are extremely sensitive to cold, especially those with Raynaud’s syndrome, as well as for pregnant women.

Although many institutes offer slimming sessions by cryolipolysis, the surgeon insists on the fact that one should consult a plastic surgeon or doctor.

It is also possible to get more information from the various professional associations.