As soon as he could count money, Bongani Gumede set off to begin life as a conductor for a priest-cum-taxi owner/driver in Umlazi, Durban. 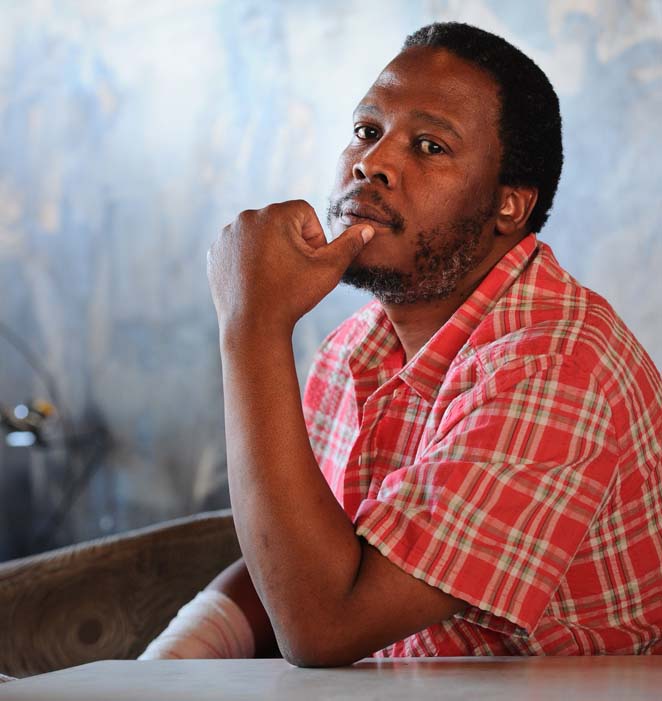 Gumede was nine and the priest was a man he regarded as his father even though there were no biological ties linking the two. Gumede became accustomed to this life, coming into contact with taxi violence and the colourful and sometimes vulgar language employed by taxi drivers.

The role of the conductor is an important one, as he makes sure that the driver can focus on driving while he counts the money and keeps a lookout for prospective passengers.

As he pursued the arts later on in life, the taxi industry came back to visit him once again in the form of the telenovela Isibaya. Gumede plays the role of Mandla Ndlovu, a crummy, shoddy taxi man. Even with the absence of dialogue, sometimes just observing Gumede’s manner on the show suggests that he was plucked from Noord Taxi Rank and placed directly on the small screen.

It is perhaps no wonder that Gumede has been nominated for a Royalty Soapie Award in the Outstanding Supporting Actor Category. He is a favourite among viewers for his character’s tendency to insult and threaten the use of violence when resolving any dispute. Gumede himself is an imposing fellow but recalls only one incident of violence in which he was directly involved during his taxi days.

“I was a relaxed guy and never threatened anyone when I worked as a conductor,” he says.

“Except I only remember one incidence where I disciplined a guy with a car wash rag at the rank for talking nonsense. I moered him while his face rubbed the ground.”

It is not hard to imagine Gumede “disciplining” anyone, especially after he played the muscle for a slum lady in Yizo Yizo 3. His role in Isibaya stands out most for him personally, though, as he delved into his past for inspiration and was at liberty to translate and interpret English text to Zulu with abandon.

“Without overlooking the other members of the cast on Isibaya, most of the guys from KZN took it upon themselves to make the translation as rich as possible,” Gumede continues.

“I think I started doing things this way because at some stage in other productions I would be given a script translated by non Zulu speakers, which meant that the language was not accurate. So I requested permission to do my own translations because I’m proud of my language.

“I’m an old school artist who likes to sit down and scrutinise the character that I am playing and every other aspect of the the job. I love it most when I am given the freedom to create the character myself or sit down to determine how we can explore certain things. And when you create a character, you can’t just have fiction – you need to have a little bit of reality.”

There was a time when Gumede’s ‘father’| the priest unwittingly landed himself in trouble with a notorious Umlazi gangster due to a misunderstanding. He had to be hidden and protected by members of the church, and at one stage people had to sleep on top of the roof in order to protect him.

“The reality that I brought into this role involved me having to recall all those moments,” continues Gumede.

“The killing of a man was not a big thing in the taxi industry at the time and Isibaya touches on that here and there. It is strange that my life experience and me going into the arts as an actor seem to be coming together and putting food on the table.”

When replying to questions, Gumede narrates his answers in a story format, making sure that the context and setting is in place and giving fully complete and rounded answers. He thrives on links that characterise his journey from nowhere to his current position. Storytelling is his raison d’être and when probed about his reaction to the Royalty Soapie nomination, he speaks about a hit list and being called ‘Gatsha’ after Inkatha Freedom Party (IFP) leader Mangosuthu Buthelezi.

“I took a job at a brick making factory when acting was not paying after I first arrived Joburg,” Gumede says.

“It was at a time when there were political fights with the IFP or ANC and in some instances there were fights between Zulus or Xhosas and the like. And then I heard that I was on a hit list merely because I was Zulu, and at the time they named me ‘Gatsha’ because I wore spectacles and this name also meant that everybody knew I was Zulu.

“So I had to resign and went to study acting at the Market Theatre Laboratory. That is where the passion for storytelling was further exposed within me. Storytelling is my fulfilment and anything else is just a bonus. So getting nominated means that somebody appreciates what I do, and that is enough for me. Winning would be great, but being nominated is enough.”