Bentley has introduced the the first diesel model in the company’s history and South Africans are going to love it because it is an SUV. 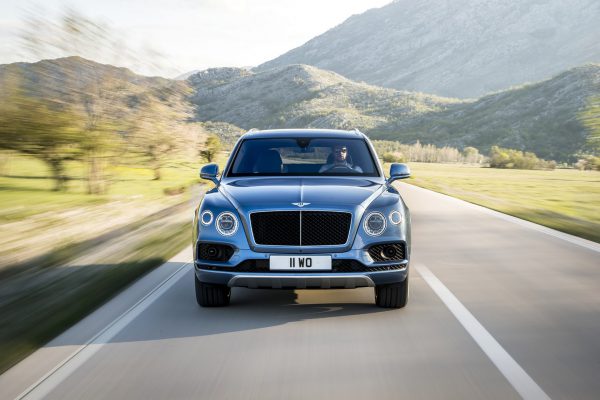 True, only very few South Africans are going to be able to afford even the baseline Bentayga Diesel at R2 950 000, but looking costs nothing and the vehicle is striking so one will benefit from just a peek as one glides by.

At the heart of the world’s fastest and most powerful luxury diesel SUV is an all-new, technologically advanced, triple-charged, 4.0-litre, 32-valve V8 engine.

Not bad for a two-and-a-half ton vehicle.

New clean technology gives the Bentayga Diesel the lowest CO2 emissions of any Bentley, as well as a range of over 1 000 km – allowing owners to, for example, drive from London to Verbier, Bordeaux or the Scottish Highlands on a single tank. Inside, the Bentayga Diesel retains the innovative features, advanced technologies and handcrafted luxury for which the Bentley Bentayga is renowned.

The Bentayga Diesel demonstrates the same authentic and modern British luxury design as its W12-powered stablemate, while also benefitting from a number of unique styling additions.

A V8 Diesel badge is embedded on the lower front door edge, complemented by a new Bentley “twin-quad” exhaust tailpipe design, which provide a further subtle reminder of the new engine specification.

Further distinctive external styling cues include a bold, black matrix grille with chrome surround and central bar, which serves as a signature for the powertrain that lies behind.

The hand-selected veneers – including a new Liquid Amber finish introduced with Bentayga Diesel – form pure and elegant surfaces throughout the cabin. Each of the 15 pieces are shaped by Bentley’s artisans and finished with trademark Bentley attention to detail.

Last month the Bentley Bentayga demonstrated its outstanding performance credentials by claiming the outright record for a production SUV at the Pikes Peak International Hill limb.

Admittedly, this was using the W12 6.0 litre version but it is still a tribute to the design integral to the range and achieved using the same 900Nm, but with power up to 447kW.

Bentley’s member of the board for sales and marketing Chris Craft commented: “This record proves the outstanding dynamic ability of the Bentayga – demonstrating again how Bentley Motors is the only automotive company in the world that can combine pinnacle luxury and breathtaking performance.

Congratulations to all at Bentley Motorsport and to Rhys Millen and his team.” Speaking immediately after his run, Millen commented: “What an incredible machine. To take a luxury SUV with minimal modifications and be able to drive up this course in under 11 minutes is a huge testament to the performance and level of engineering in the Bentayga.

“I had a great run – the car was planted all the way up and gave me the confidence I needed to push hard. ”

Only minimal changes were made to a standard production Bentayga in order to comply with the rules.

The front seats were replaced with racing versions while the rear seats were removed, and a roll cage and fire suppression system were installed.

Tyres were selected from Pirelli’s DOT-marked range, and a production-specification Akrapovic sports exhaust was fitted. In every other way, the Pikes Peak car is a standard Bentayga, finished in stunning Radium Satin paintwork accented
by the allblack chrome and carbon fibre body kit provided by Bentley’s Black Specification.