Ballington now a Hall of Famer South Africa’s second motorsport world champion Kork Ballington has been inducted into the MotoGP Hall of Fame, to become one of two-wheeled racing’s official legends. 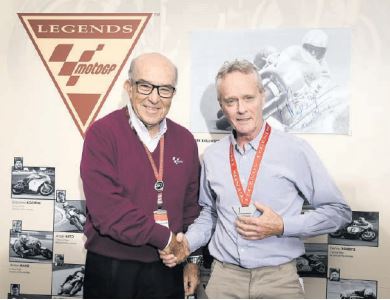 Ballington raced in Southern Africa for many years before moving to Britain to pursue an international career.

He raced an over-the-counter Yamaha twin in Britain and the European motorcycle Grand Prix for several years before being given a place in the Kawasaki factory racing team riding Kawasaki KR250 and KR350 machines alongside Mick Grant and Barry Ditchburn.

Ballington took his first podium in 1976 when he finished second in the 250cc race at the West German Grand Prix and followed up in the 350 World Championship with his first win, taken at the Spanish Grand Prix.

The year 1977 saw more podiums and wins – with his first 250 victory coming at Silverstone.

He began 1978 off the podium in both Championships before making his next visit to the top rostrum step in the 350cc race at the Salzburgring.

Ballington then took both the 250cc and 350cc wins at the Nations GP at Mugello, something he also did in Finland and at Brno.

In all, Ballington won four 250cc wins and six 350cc races on the way to winning both titles that year. In 1979, it was a similar story as the Southern African on the green Kawasakis dominated.

Seven 250cc wins – achieved three-in-a row and then four-in-a-row – saw him defend that crown, and five wins in the 350cc World Championship also wrapped up that title.

Ballington decided to target the 250cc and 500cc championships in 1980 and was runner-up in the lower category while taking some top-10 results on the 500cc machine.

That laid solid foundations and his first podiums in the premier class came the following season in the Netherlands and Finland.

But, developing an all-new bike proved difficult in the premier class and podium places became few and far between the next three years. His final year of competition came in 1982.