It controls vehicle speed electronically to allow the driver to negotiate steep or slippery descents safely and adjusts the speed lower or higher, depending on whether the driver applies the brake or accelerator. Historically South Africa is a bakkie-loving country, but according to the monthly sales figures, some get significantly more love than others.

Just 603 units of the VW Amarok, Mazda BT50, Nissan Navara, Fiat Fullback, GWM Steed and Mitsubishi Triton were moved. We can’t add the Mercedes-Benz X-Class because they don’t release model-specific sales figures, but the talk is that they could not have made a significant contribution to the total. 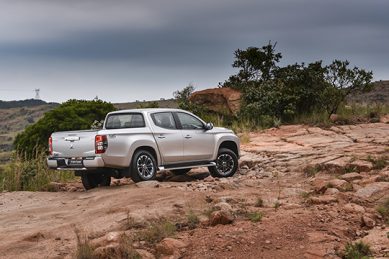 Although all those less-popular bakkies are decent vehicles in their own right, buyers are just too loyal towards the traditionally preferred bakkie brands. Now Mitsubishi has thrown down the gauntlet with the introduction of the new Triton. It’s offering (only available as a double cab) is as tough and reliable as anything on the market and it is very competitively priced. In fact, their top model – the 4×4 automatic – is R25 000 cheaper than its nearest competitor. Says a confident Nic Campbell, general manager of Mitsubishi Motors South Africa: “The price will certainly get customers interested and once they drive it, they will sign on the dotted line.”

The new Triton is immediately recognisable, thanks to its bold and tough-looking new face, which incorporates the latest iteration of the Dynamic Shield front design concept. The styling is in line with the recently launched Eclipse Cross and will become the striking front feature on all Mitsubishi models in future. But the Japanese manufacturer doesn’t want to be judged on good looks alone and is confident the fifth generation Triton is tough enough for the harsh conditions bakkies in South Africa experience on a daily basis. 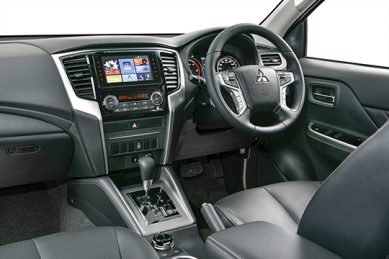 The brand has a rich local heritage which began in 1978 and included three generations under the Colt badge before changing to Triton for the fourth generation, which was launched back in 2005. Hiroyasu Inoue, general manager of Mitsubishi Sub-Saharan Africa, says: “The Triton has a rich history spanning over 40 years during which 4.7 million units have been sold worldwide. “We know South Africa’s unique affinity for bakkies only too well.

“It is a very important market and this bakkie is exactly what South Africans need,” added Inoue, who is said to have practised pronouncing “bakkie” in his heavy Japanese accent over and over until he got it right. All four models will sport the tried-and-tested 2.4L MIVEC turbodiesel engine from the previous generation, coupled to either an all-new six-speed automatic or manual gearbox.

The powertrain produces 133kW at 3 500rpm and 430Nm of torque at 2 500rpm. The latest version Super Select II four-wheel drive system is used with an off-road mode available on the automatic transmission derivatives. The off-road mode has gravel, mud/snow, sand and rock settings for improved traction on different road surfaces. 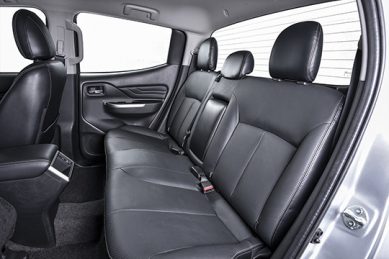 The manufacturer was eager to showcase the hill descent control that has been added to the 4×4 automatic transmission derivative at the launch drive near Hekpoort and it was easy to see why.

It controls vehicle speed electronically to allow the driver to negotiate steep or slippery descents safely and adjusts the speed lower or higher, depending on whether the driver applies the brake or accelerator. 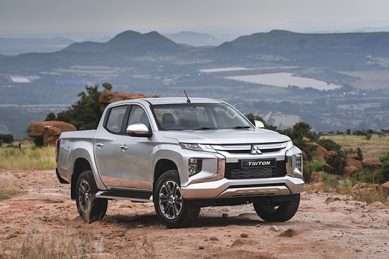 Inside, the Triton has been restyled with a host of comfort features of which the leather seats and touchscreen entertainment system – a reminder of how far the bakkie has evolved. It features class-leading advanced active safety and driver assistance systems which make it a good option in the segment.