Powered-up Alpine A110 S debuts ahead of Le Mans showpiece

On the eve of the 87th running of the 24 Hours of Le Mans, Renault owned Alpine has made good on its limited detail teaser earlier this week, by revealing a reworked version of the retro-styled A110 sports coupe. Revived back in 2017 at the Geneva Motor Show, the newest creation from the Dieppe-based automaker carries the S moniker and according to its Chief Designer, Jean-Paul Dauce, has a ‘very different character’ to the regular A110 that was ‘pitched very much in line with the original 1970s A110’.

On the outside, the A110 S’ differences from its sibling is small and mainly consist of dark, model specific 18-inch alloy wheels wrapped in Michelin Pilot Sport 4 tyres, a new flag details on the pillar trimmed in carbon fibre with an orange script, black Alpine badging on the rear facia and, from the options list, an optional Gris Tonnerre matte paint finish, lightweight forged Fuchs alloys and a gloss carbon fibre roof that cuts the overall weight by 1.9 kg.

Inside, orange stitched seatbelts replace the blue inlay items used until now, while the lightweight theme continues in the form of Dinamica trimmed Sabelt sport seats that weigh 13.1 kg each and alloy pedals as well as foot rests. In addition, the cabin also receives a black Dinamica headliner, sun visors and door panels, a Dinamica and leather wrapped steering wheel with orange stitching and 12 o’clock marking, carbon fibre inlays and orange flag details. 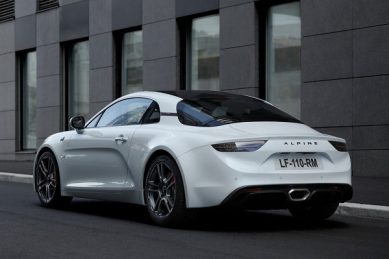 Highlighted by the presence of orange painted Brembo brake calipers with a 320 mm disc, four-piston setup at the front and single design at the rear with the same diameter, the majority of the A110 S’ updates are to be found underneath where the coil springs are 50% stiffer than before and the anti-rollbars firmed-up by 100%.

Moreover, Alpine has also tweaked the A110 S’ dampers, lowered the overall ride height by four millimetres and retune the Electronic Stability Control to be switched off completely.

Up front, the A110 S comes powered by its sibling 1.8-litre turbocharged engine also found in the Renault Megane RS, but unlike the RS Trophy variant, has been re-tuned to produce 215 kW instead of 221 kW with torque once again being pegged at 320 Nm. 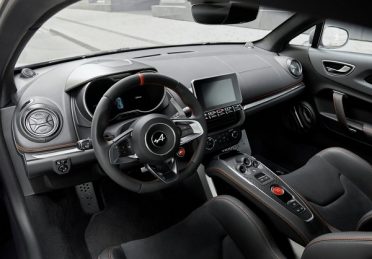 Priced from €66 500 (R1 112 912) in France, the A110 S, like the standard model, is not expected to be offered for sale in South Africa despite Alpine having made it available in right-hand-drive for markets like Australia and the United Kingdom.