Mercedes-Benz resumed its SUV introductions last week by unveiling plug-in hybrid versions of the GLC and GLE at the Frankfurt Motor Show.

Although both differ from their non-hybrid counterparts only in terms of the additional fuel cap hiding the charging port, the drivetrain layout is bespoke with the GLC featuring petrol power and the GLE diesel. 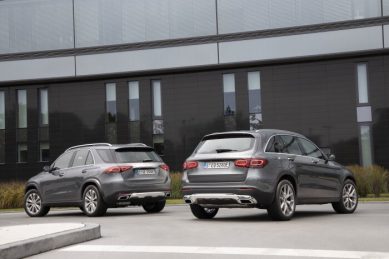 Paired to the 9G Tronic gearbox and with 4Matic all-wheel-drive, the GLC 300e has a claimed all-electric range of 43 km, and can travel emissions free at up to 130 km/h. Fuel consumption is rated at 2.2 L/100 km.

Like its smaller sibling and as with the rest of the GLE range, the 350 de sends its power to all four wheels via the 9G Tronic gearbox, with Mercedes-Benz claiming an electric only range of 99 km and emissions free driving at up to 160 km/h. Fuel consumption is pegged at 1.1 L/100 km.

At present, neither are forecasted to arrive as yet.