It is happening: Alfa Romeo will reveal Giulia GTA today

Cryptic messages on each post seems to confirm that the fabled GTAm moniker will make a comeback for the first time in nearly forty years. In a surprise announcement, Alfa Romeo has released a series of teaser images and indeed a video confirming that the wraps will come off of the new Giulia GTA later today (2 March).

While the series of sketches posted by the marque on its Facebook page merely reads, “the Legend Returns”, a series of cryptic messages on each post, such as “reducing the unladen weight to 745 kg makes it possible to drastically improve the car’s performance and handling”, as well as the video that flashes up “heritage”, “power”, “adrenaline” and more importantly, “lightness”, seems to confirm the report by carscoops.com last week that the fabled GTAm moniker will make a comeback for the first time in nearly forty years. 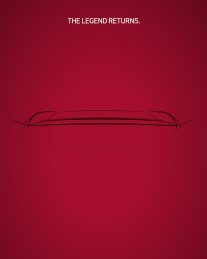 With a reported output of 463 kW from the same Ferrari derived 2.9-litre twin-turbocharged V6 engine as the Giulia Quadrifoglio Verde (QV), the GTAm will be a more hardcore version of the GTA and according to reports, and indeed the teaser hints, cut down on weight with most of the creature comforts being dropped and a roll cage occupying the position of the rear seats.

Initially slated for unveiling in Milan on 24 June as part of Alfa’s 110th anniversary, the covers will in fact be lifted at 15h30 this afternoon.