The wraps are officially off: BMW unveils “expressive” 4 Series

Design of the grille not only improves air flow, but contributes to the overall look having a “degree of exclusivity and prestige". Singled out right from the beginning for the oversized kidney grille that first appeared on the Concept 4 at the Frankfurt Motor Show last year, the internally designated G22 is once again based on the same platform as the 3 Series, in this case, a stretched version of the familiar CLAR that measures 4 768 mm in overall length and comes with a wheelbase of 2 851 mm, height of 1 383 mm and width of 1 852 mm.

With its dimensions translating into a gain of 128 mm overall with the wheelbase having been extended by 41 mm, the width widened by 28 mm at the front and 18 mm at the rear and the overall height raised by six millimetres, the G22, which BMW claims draws inspiration from the 1930’s 328 and the 3.0 CS from the ‘70s, is said to be “expressive” in addition to being easily distinguishable from the 3 Series. 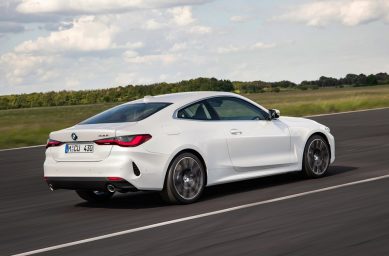 According to Munich, the design of the grille not only improves air flow, but contributes to the overall look being both “distinctive” in addition to having a “degree of exclusivity and prestige” while also “radiating pure driving pleasure from every angle”. For now, only the coupe is available with the already seen cabriolet arriving later this year followed by the four-door Gran Coupe.

Fitted as standard with LED headlights or BMW’s Laserlight system as a cost option, the 4 Series is once again billed as a four-seater with the interior being carried over from the 3 Series, thus resulting in the same equipment such as the standard 8.8-inch iDrive touchscreen infotainment with 7.0 operating system, a 5.1-inch instrument cluster display, Apple CarPlay and Android Auto, wireless smartphone charger, mood lighting, an optional glass panoramic roof and a newly designed multi-function steering wheel.

As well as a range of materials and fabrics ranging from leather to Sensatec imitation leather in various colours, the Four can optionally be specified with the M Sport interior pack, colour Heads-Up Display, the upgraded 12.3-inch digital instrument cluster and 10.25-inch iDrive display as part of the Live Cockpit Professional setup and a choice of three sound systems; the standard 100 watt six-speaker audio, a ten-speaker hi-fi with 205-watts and the flagship 16-speaker Harman Kardon that delivers 464-watts and comes with an additional seven-channel amplifier. Riding as standard on 17-inch light alloy wheels with up to 20-inches available, the 4 Series is also new underneath the bonnet where a 48-volt mild-hybrid system that adds an additional eight kilowatts, comes as standard on all diesel models and six-cylinder petrol engines, the former further benefitting from twin-stage turbocharging. 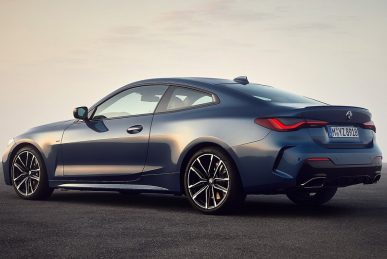 The only petrol derivative to feature the otherwise optional M Sport exterior pack as well as the upgraded M Sport brakes with blue or red calipers, Adaptive M suspension and M Sport differential as standard, the all-wheel-drive M440i will get from 0-100 km/h in 4.5 seconds and top out at 250 km/h.

Performance figures for its lesser siblings are a top speed of 240 km/h for the 420i and 250 km/h for the 430i, with respective 0-100 km/h times of 7.5 seconds and 5.8 seconds. In some markets, the all-paw gripping xDrive system will be fitted on the latter as an option.

On the diesel side, three powerunits feature; the 140kW/400Nm 2.0-litre in the 420d and two versions of the 3.0-litre straight-six that delivers 210kW/650Nm in the 430d xDrive and 250kW/700Nm in the M440d xDrive thanks to the addition of a second turbocharger. While xDrive is optional on the 420d, it comes as standard on both six-cylinder models. 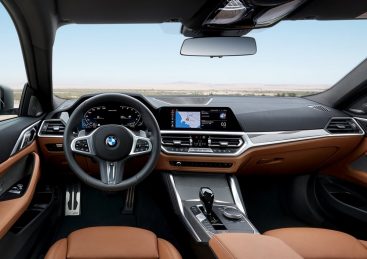 In a departure from the previous 4 Series, no manual transmission is offered as the entire line-up comes fitted as standard with the eight-speed Steptronic gearbox, which in the case of the M models, feature the sports ratio setup.

Along with the 5 Series, 6 Series GT and 7 Series, production will take place at the Dingolfing plant with the various launches starting in October. BMW South Africa has meanwhile confirmed the commencing of sales from the fourth quarter with only three models being offered; the 420i, rear-wheel-drive 420d and the M440i xDrive. Local pricing and spec will only be announced closer to the final launch date.