Both the GT-Line and X-Line being under consideration. Fresh from its unveiling as the Morning in South Korea last month, Kia has now revealed the updated European-spec Picanto that is also expected in South Africa. On top the updates, the sporty GT-Line benefits from a number of model specific changes, namely red accents on the grille, a new bodykit with gloss black inserts, jewel-like fog lights and gloss black detailing on the bumper. At the other end of the spectrum, the crossover-inspired X-Line boasts metal effect faux front and rear skidplates, black wheel arch cladding and black detailing on the grille. 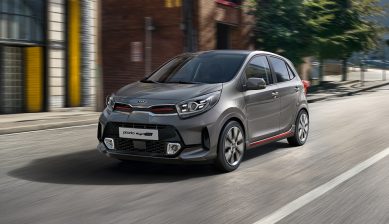 Like the Morning, the Picanto’s revised interior is highlighted by a new 4.2-inch TFT instrument cluster display and an eight-inch touchscreen infotainment system with Bluetooth, Apple CarPlay and Android Auto, as well as cloth or synthetic black leather seats with silver or gloss black inserts on the doors, centre console and around the gear lever. 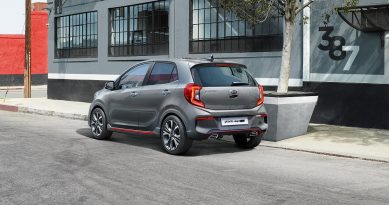 Unique to the Picanto though are four customised colour packs depending on the trim level. They include the Green Pack which features green accents on the doors and denim-like upholstery on the seats and the Red Pack made up of gloss black inserts with red-and-black detailing on the doors, and black faux leather with red side bolsters. 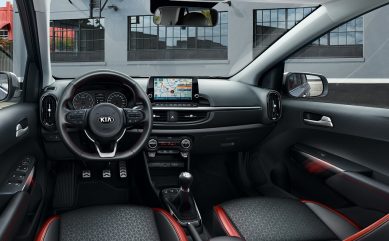 For the Lime Pack, a metal effect finish is applied to the transmission tunnel and around the air vents, with the doors receiving silver-and-lime detailing and black seats with lime stitch work. Rounding the colour packs off is the Orange Pack that mirrors the Lime, only, as its name states, with orange stitching on the seats and accents on the doors.

Underneath its small bonnet, the Picanto is again powered by a choice of three engines, albeit now equipped with the marque’s Smartstream technology. Shared with the Hyundai i10, the entry-level, normally aspirated 1.0-litre three-cylinder punches out 49kW/96Nm, while the next step-up 1.2 delivers 62kW/118Nm. Capping the range off is the 1.0 T-GDI whose blown three-pot produces 74kW/175Nm. A brand-new five-speed manual transmission is standard on all three models, with an equally new five-speed automated manual (AMT) being optional as a replacement for the old four-speed automatic. Now available on the Old Continent, the facelift Picanto has been confirmed for a fourth quarter South African market debut with both the GT-Line and X-Line being under consideration.