Initially, the new Corsa will be made available with Opel’s state-of-the-art three-cylinder 1.0-litre turbocharged ecoFLEX engine with three trim levels: Cosmo, Enjoy and Essentia. The Corsa’s chassis does not inherit a single component from the outgoing model. Every conceivable set screw was turned in order to achieve a better driving experience, with new levels of comfort, precision and enjoyment. At the same time, engineers concentrated on finding the optimal balance between enjoyable dynamics and predictable, safe road holding.

In addition to its 5mm-lower centre of gravity, the Corsa receives a new, stiffer, redesigned chassis. The front MacPherson suspension has a new geometry with new front knuckles which improve the vehicle’s roll and understeer behaviour, as well as steering response. A new, reinforced sub-frame increases torsional rigidity, while dual strut mounts provide improved responsiveness on uneven surfaces.

The rear axle torsion bar has ,also been redesigned and an enhanced stabiliser has been added to reduce tilting for better cornering compliance and stability.

In order to improve directional stability, the Opel engineers changed the mounting points of the rack-and-pinion steering shaft and optimised its geometry. A newly constructed mounting for the steering column saves space which is filled with additional padding material and increases driver safety in case of a collision. Furthermore, the steering column possesses special impact absorbers. All new Corsa models are equipped  with a new standard City Mode steering setting which allows reduced steering effort at low speeds for easing manoeuvres. City Mode is activated at the press of a button, which is on the centre console.

Another innovative feature is the active cornering component of the Corsa’s steering which aids the driver in crosswinds and on convex roads. Among others, the software is fed with the data from Opel’s ninth-generation Electronic Stability Program (ESP Plus). This system takes care of no less than 11 different functions, including new Hill Start Assist.

The fifth-generation Corsa can also be specified with Opel’s Advanced Parking Assistant 2 in Enjoy and Cosmo trim. This system recognises parallel and perpendicular parking spaces and takes over the steering, meaning the driver only has to control the pedals and gears.

The base-model new Corsa is fitted with 15-inch wheels and 215-width tyres with ventilated front and solid rear discs which can easily cope with high stress. Pedal feel is distinguished by an exactly defined pressure point and excellent controlability. The braking system is assisted by electronic aids which permanently receive information from the ABS/ESP sensors. For example, the systems recognise whether the braking manoeuvre is being performed while cornering and distributes the braking force to all four wheels depending on the load.

The new Corsa benefits from Opel’s biggest powertrain offensive in the company’s history, which includes three new-generation engine families and will result 17 new engines introduced by 2018.

The Corsa receives Opel’s state-of-the-art 1.0-litre ecoFLEX Direct Injection Turbo engine. First introduced in the recently launched Opel ADAM, it also is the highlight of the fifth-generation Corsa. The 85kW engine provides 170Nm from just 1 800rpm and is mated to a new, compact six-speed manual gearbox. Forming part of the “Sight and Light Pack”, the bi-xenon headlights are mated to an auto-dimming interior mirror, rain-sensing wipers and automatic headlight control.

Opel’s award-winning IntelliLink infotainment system, which brings the connected world of smartphones and apps into the car, is available as an option on Enjoy and Essentia models and standard on Cosmo. IntelliLink is fully compatible with the latest Android and Apple iOS-based smartphones. 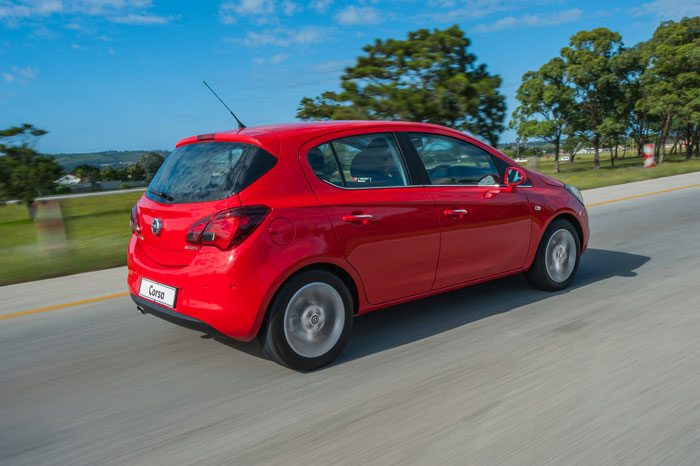 BringGo is IntelliLink’s navigation app. It can be easily downloaded from the phone’s app store and, once downloaded, the map data remains installed on the user’s smartphone, which means Corsa owners do not need an ongoing smartphone broadband connection to use the BringGo navigation system.

The Stitcher app is a useful global podcast internet radio service which lets users listen to programmes live, or after they have been broadcast.

Once Stitcher is downloaded to the smartphone, Corsa owners can access more than 10 000 podcasts on demand, including radio shows and live stations from around the world, via the Corsa’s IntelliLink touchscreen.

With access to a global network of 70 000 radio stations, the TuneIn app has the power to offer entertainment to suit the tastes of every listener.

The integration of Apple iOS devices with IntelliLink also enables Siri Eyes Free voice control. This makes it possible for drivers to make calls, play music, send and receive messages and e-mails – with received messages read out – and access calendar functions like set alarms, check reminders or respond to meeting requests with their eyes on the road and hand on3 the wheel.

All new Opel Corsa derivatives will be sold as standard with Opel’s five-year/120 000km warranty and a three-year/ 60 000km service plan.