Speedster makes use of a hybrid platform in deriving elements from the Vantage and DBS Superleggra. Having confirmed in January that a roofless modern day tribute to the 1959 24 Hours of Le Mans winning DB1 would become a reality, Aston Martin has now revealed the limited edition V12 Speedster that was to have made its world debut at the Geneva Motor Show.

As mentioned by Aston CEO and President, Dr Andy Palmer in the confirmation report, the Speedster not only pays homage to the victories DBR1 driven by Roy Salvadori and the Carrol Shelby, but also the CC100 Speedster concept unveiled seven years ago. 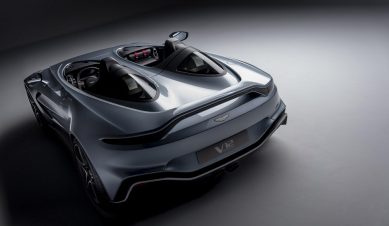 The work of Gaydon’s Q by Aston Martin division, the Speedster makes use of a hybrid platform in deriving elements from the Vantage and DBS Superleggra, such as the aluminium architecture, an independent double wishbone front suspension and multi-link rear design with coil springs, plus standard carbon ceramic brakes with the discs at the front measuring 410 mm and those at the rear 360 mm.

Made mostly out of carbon fibre and doing without a windscreen or roof as mentioned, the Speedster, which Aston claims takes additional inspiration from the F/A-18 Hornet fighter jet, comes decked out in a  bespoke colour called Skyfall Silver, a nod to the 2012 James Bond film, and boasts a unique interior claimed to “push boundaries”. 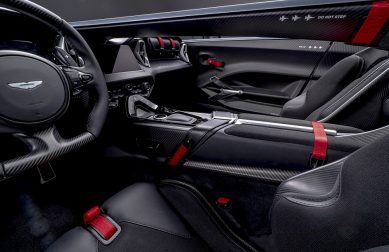 Along with the carbon fibre exterior, a combination of saddle leather, machined aluminium, dark satin chrome and 3D printed rubber is used inside, with removable leather bags replacing the glove box. Adorned with black leather upholstery and black carpets, scripted Vivid Red door pulls replace the traditional door handles with additional storage coming in the form of compartments integrated into the humps behind the headrests.

As indicated by its name, the Speedster comes powered by the same AMG-sourced 5.2-litre twin-turbo V12 engine as the DBS Superleggra that has been tweaked to deliver 515kW/752Nm. Equipped with a limited slip differential, the amount of grunt is routed to the rear wheels via an eight-speed Touchtronic gearbox with the claimed top speed being 300 km/h and 100 km/h reached from standstill in 3.5 seconds. 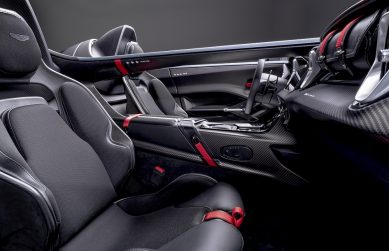 With order books now open, delivers of the Speedster will commence next year with production being limited to just 88 examples priced at £765 000 (R14.9-million).