Can you spot it? Next Hyundai Tucson shows up in leaked product plan

Thumbnail sized image, on very close inspection, provides a few hints of what to expect. Marking its fifth year in production this year, a leaked production schedule has emerged showing the all-new Hyundai Tucson as entering production at the automaker’s Ulsan Plant in August.

Despite displaying the actual model on the document obtained by autopsy.net, subsequently published by indianautosblog.com, the thumbnail sized image, on very close inspection, provides a few hints of what to expect, namely the same Cascading Grille as the new Elantra and Santa Fe inspired split headlights. 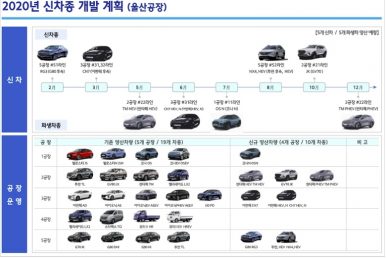 Carrying the internal designation NX4, the Tucson, according to the Indian online platform, will come with a digitised interior likely to be similar to that of the Elantra, while providing seating for seven for the first time.

As indicated earlier this week, the Tucson is expected to ride on the same unibody platform as the Santa Cruz pick-up, with power set to come from an assortment of petrol and diesel engines, as well as a first time hybrid drivetrain.