XDS electronic front differential will also be included, but more than likely on flagship models only. On course to make an alleged debut in June, Volkswagen has provided the clearest images yet of the all-new Nivus crossover.

Shown in a grainy teaser last month, the latest snaps by Wolfsburg’s Brazilian division sees the still camouflaged Nivus sporting a distinctive coupe appearance with a rounded rear-end similar to the North American Altas Cross Sport and a full-length light bar seemingly derived from the Audi A7 Sportback.

At the front, the Nivus, which will ride on the same MQB A0 platform as the Polo and T-Cross, draws heavily from not only the latter, but also the Jetta and US-market Passat in the shape of the grille, headlights with integrated daytime running LEDs and the pronounced lower air intake.

According to official documentation, the Nivus measures 4 266 mm in overall length with a wheelbase of 2 566 mm and height of 1 493 mm. Trounced by the T-Cross in height and wheelbase, the Nivus is however longer overall with Volkswagen claiming a overall boot capacity of 415-litres. In spite of boasting the same ground clearance as the T-Cross, motor1.com Brazil, in a related report, states that the XDS electronic front differential will also be included, but more than likely on flagship models only. 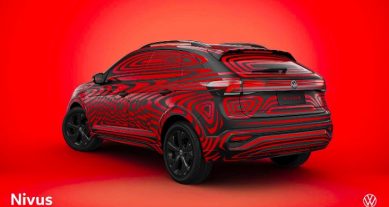 Its interior also seen, albeit only in sketch form, the Brazilian online publication further reports that features will consist of an eight-inch touchscreen infotainment system, the same multi-function steering wheel as the T-Cross, the 10.25-inch Active Info Display digital instrument cluster and the option of Adaptive Cruise Control.

Underneath its bonnet, and in contrast to previous reports, only one drivetrain option has been mentioned; the 94 kW/200Nm version of the 1.0 TSI engine hooked as standard to the six-speed Tiptronic gearbox, a setup already used on the Virtus sedan.

Set to be built by Volkswagen do Brasil before going on sale in Europe next year, the front-wheel-drive only Nivus will reportedly be priced from R $ 90 000 (R323 301) in Brazil, but it remains to be seen whether Volkswagen South Africa will see it fit for the local market at some stage.