This incredible video shows the real-life 'Jaws' moment a majestic great white shark bears its mouth and teeth at a boat. 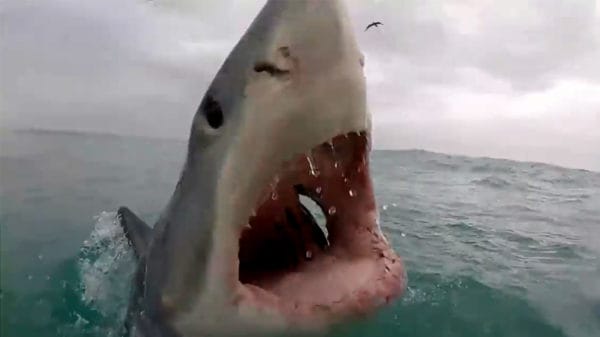 Cameraman Anthony Kobrowisky captured the shark on film aboard a great white shark diving boat. Anthony says he has had many encounters with the stunning creatures – but this one stands out above the rest.

Footage shows the shark swimming close to Anthony’s camera and the cage of divers – snapping at bait and breaching the waters surface. South African Anthony, 35, who now lives in Olso, Norway, said: “I worked as the cameraman on a white shark diving boat for three years. ”I would have a camera strapped to a long pole. ”When I could see the shark, I would wait for the shark to approach a long line with a tuna head attached to the end.

“The white sharks are generally very quick so you had to be ready all the time otherwise they would surprise you and be on the bait before I could get a video shot of the shark. “My favourite aspect was that you never knew what you would see on the day.

Even though white sharks look incredibly dangerous, they are a lot more than that! ”They are an Apex Predator and are an essential part to the ocean’s eco-system.”Anthony’s footage is utilised by his photography company Sea Candy Media to raise the public profile of sharks.

He said: “We need all sharks in our ocean and sadly many of these species are critically endangered. It is said that over 100 million sharks are killed yearly!

This is primarily due to the shark fin industry and shark fin soup.”The amount of sharks killed is not sustainable and will have a negative impact on all of our lives. ”The ripple effect will be felt by everyone when these sharks disappear. ”If there was one thing that everyone should be aware of is that we need to protect sharks. They need our protection.”It was filmed on December 2017.

WATCH: Bangkok 'taxi graveyard' comes to life with mini-gardens
1 day ago
1 day ago

WATCH: Pet influencers on the rise in Singapore
7 days ago
7 days ago

WATCH: Bangkok 'taxi graveyard' comes to life with mini-gardens
1 day ago
1 day ago

WATCH: Pet influencers on the rise in Singapore
7 days ago
7 days ago