It is alleged the man had a bag placed over his head and was hit with various objects including pistols, bricks and pipes. 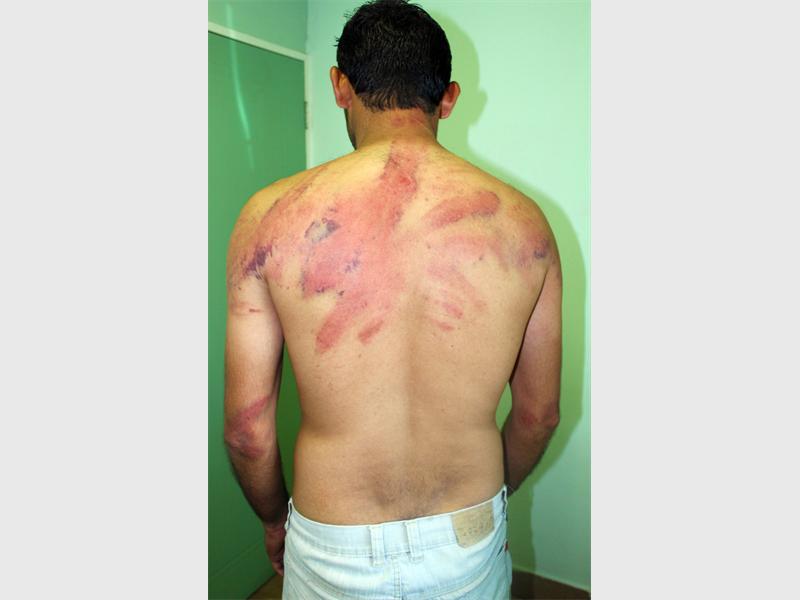 he victim was allegedly horribly beaten by police.

A victim of assault was allegedly brutally beaten and tortured by three members of the South African Police Service in Limpopo and is now carrying the scars and pain, Review Online reports.

The victim, a Pakistani man who prefers to be anonymous, and his scared family told Bosveld that he was attacked on Tuesday around midday.

The bruised victim of assault.

According to the man, three policemen and two civilians are responsible for his bruises.

“I know one of the attacker’s faces. I have seen him a lot before. I have seen him in police cars. I know he is a police officer. In the rush I heard the name or surname, Ledwaba,” claims the man.

“I was at my shop when the three members of the police, in civilian clothes possibly from the Crime Intelligence Gathering Unit(CIG), came in and told me that the two suspects bought stolen goods from me. They yelled and confronted my shop assistant. She told them that she had been working with me for a few months and knows for a fact that I do not sell stolen goods in my shop.”

“They arrested me on the spot without any proof or any case. They [then] handcuffed me and forced me into a silver Ford Ikon sedan.”

He further said that they beat him in a nearby bush and then took him to the Mokopane cemetery. They allegedly put a bag over his head and hit him with various objects such as pistols, bricks and pipes.

“They threatened to hurt my family and even said that my passport is invalid. That is one of the most terrifying experiences I have ever had in my life”.

Afterwards the men allegedly dropped the helping members at various places and also left the victim at his shop with the handcuffs still on his wrists.

The victim went to the Mokopane police on Wednesday to open a case of assault, but is afraid that it will “disappear like many other cases in court”. He feels that corruption forms a big part of the police in Mokopane.

His wife said that she was shocked by this incident and does not trust the police anymore. As a family they will never feel safe with the police again, she said.

She further added that similar incidents have happened a few times with other shop owners and warns them to be careful.

Police spokesperson Sergeant Mmadikgale Masingi, told Bosveld that the surname the victim referred to is a common one.