In the last 40 years, 11 of these rare visits to the KZN coast have been recorded. The Elephant Seal that arrived at Zinkwazi Beach this morning. Picture Cliff Hatt

An elephant seal made its way on to Zinkwazi Beach this morning (Wednesday), and the public were asked to keep clear of the animal, North Coast Courier reports.

According to Specialised Rescue Unit’s Quentin Power, the seal is merely resting on the beach.

“We ask people to please stay away from the seal – if approached it will defend itself and may even bite.”

“Once it is done resting it will move on, so please do not crowd the animal or try to approach it to take pictures, we have already had several people trying to take selfies with the seal.”

Power said if people wanted to visit the beach and see the seal it was fine, so long as they kept their distance and leave it in peace.

“It is difficult to say how long it will stay on the beach, it may leave after today or it may hang around for several days recovering its strength.”

uShaka Marine World’s Anne Kunz said the seal was likely only two years or so in age. 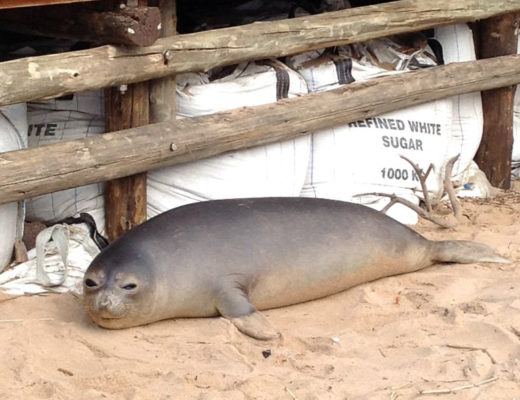 The Elephant Seal that stopped to rest at Zinkwazi Beach this morning. Picture Cliff Hatt

“These seals spend almost all their lives at sea and only come to land to breed or to rest. This particular animal is way too young to breed – or even to tell its gender with any certainty – but it does appear to be in very healthy condition.”

Kunz said it was not common for these seals to visit the beaches in KZN, though they do feed in the open ocean and occasionally end up on South Africa’s coast.

“In the last 40 years we only have records of 11 of these seals visiting KZN’s coast, they actually live on Marion Island.”

Marion Island is nearly halfway to Antarctica from the South African coast, so this young seal certainly deserves a little rest.