Infamous: Second Son is the first big exclusive game PS4 owners can use as a weapon and shield against advocates of the other systems in the ongoing circus-act that is the gaming community. 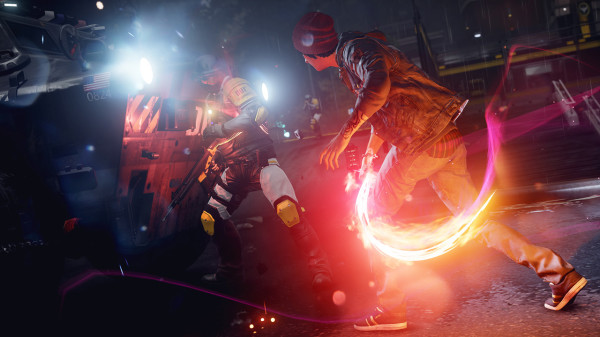 If you were a fan of the previous two games on the PS3, you might be wondering how there could be a sequel, when Infamous 2 ended so decisively.

The answer to that is quite simple: Infamous: Second Son is practically a reboot of the franchise, with hardly any connections at all to the previous two games beyond the fact that it takes place seven years after the end of the second game. I was paying very close attention to all the story scenes and there’s nary a mention of Cole MacGrath, Zeke Dunbar, Empire City, New Marais, Kessler or The Beast.

This time around, players take on the role of Delsin Rowe, a spraycan-wielding small-town misfit who’s constantly hounded by his police officer brother. A quarantine van carrying “bio-terrorists” (otherwise known as “Conduits”) crashes nearby, and Delsin attempts to help one of the occupants, somehow gaining his smoke-based superpowers in the process.

Soon after this, agents from the Department of Unified Protection (DUP), an agency dedicated to hunting down and capturing Conduits, shows up and maims a lot of the townsfolk. In order to rectify the situation, Delsin and his brother head off to Seattle to beat some justice out of the iron-fisted oppressors. 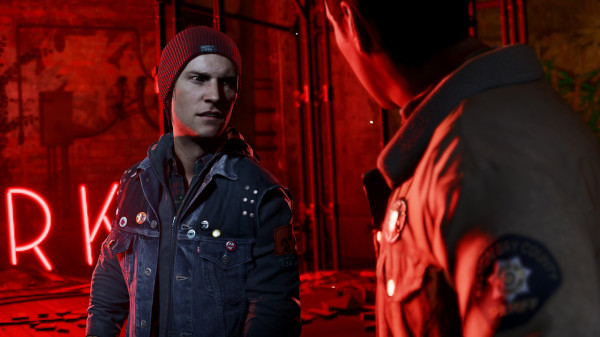 That’s as good a reason as any to present the player with a huge, open-world action game full of story missions, side missions and little distractions. If you’ve played either of the previous games, or similar games like Prototype, you’ll know the formula. Delsin starts out with a few smoke-based powers, but during the course of the game he’ll gain access to entirely new kinds of powers, like ones based on neon or video images. Delsin can also collect blast shards to upgrade his various powers.

What makes or breaks a game like this is how much fun the powers are to use, and Infamous: Second Son doesn’t disappoint in that regard. When a developer manages to engage your attention even in the mundane act of traveling from A to B, it’s a good sign. Each type of power has its own travel options. With smoke, for example, Delsin can perform a horizontal dash that lets him pass through small openings like chain-link fences and narrow gaps. He can also dash into air vents to ascend buildings quickly and launch himself into the air.

The combat is just as engaging, thanks to the variety of fun powers you have to play with. The simple smoke shot, neon shot or the rapid fire video shot are weak, but effective if you can make consistent headshots. The smoke blast and grenade are a bit better for wreaking indiscriminate havoc. The neon’s time-slowing sniping focus is a favourite of mine, as is the neon bubble grenade, which causes enemies to float around encased in a neon bubble while you zap them or deal with other threats. 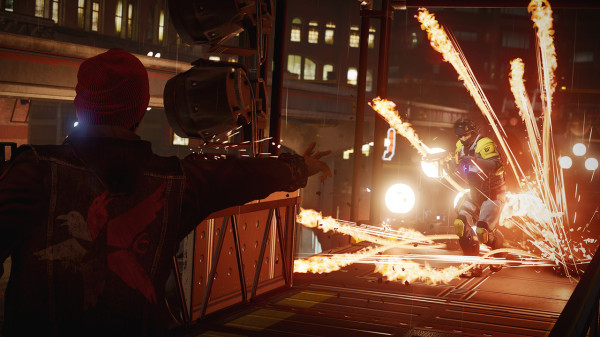 Each type of power also has a super-mega-ultra attack for killing many enemies and wrecking their vehicles and bases. These ones are charged up by doing good deeds – or presumably bad deeds, if you’re going for the evil run, but more on that later. Sucker Punch clearly went out of their way to come up with some creative powers outside of the usual fire, lightning, ice archetypes, and the game is better for it, I think.

Don’t assume that because you’ve got powers, you’re invincible. Delsin is still one guy against thousands. You’ve got to make good use of cover, retreat if you’re wounded, and try to not get surrounded. Many of the enemies are imbued with at least some of the power of the antagonist, Brooke Augustine, a Conduit with power over concrete who leads the DUP. Her soldiers have the same tough constitution, and they can create concrete shields to hide behind, hurl concrete bombs or massive concrete shards at you, or even attempt to hold you in place by encasing your feet in concrete.

This makes the big battles not only fast-paced, but also tactical, as you lob grenades to get behind the enemy shields, or take out the more troublesome ones first before you move on to the rest. 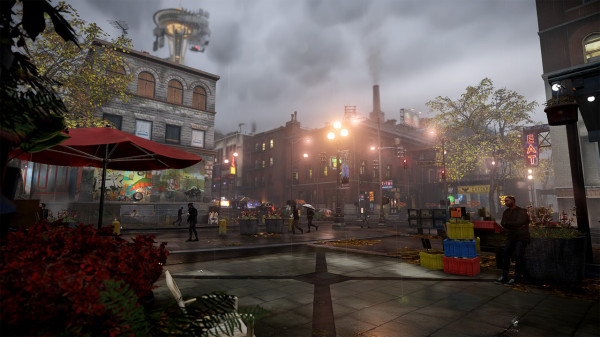 If this all sounds good to you so far, then you’ll probably be quite happy with Second Son. Unfortunately, it does have a few negative points. The first is the ever-present moral choice system. Just like before, the player is judged for their actions in the game, and occasionally presented with choices that add to either your evil or good karma points.

The end result of all this is that the story will play out a bit differently, and you’ll gain access to slightly different powers depending on your choices. This is why moral choice systems are so bloody stupid, and I wish developers would stop using them if they’re not going to do it right.

The problem is that there’s no reward for treading the middle ground: you have to be all the way good or all the way evil to get the best powers on either side – necessitating two thorough play-throughs.

It also handcuffs you in certain situations. The neon sniper power, for instance, lets you target enemy heads, to kill them (evil), or their feet, to restrain them (good). Enemies tend to hide behind cover a lot, so their heads are frequently the only targets available, but since I was going for the sunshine and love run, I had to go out of my way to get a shot at their feet to acquire good karma points, turning some battles into a chore.

It also means that you’ll be getting regular deductions for things that weren’t your fault, like AI-controlled civilians running into the crossfire, or enemies who surrender a split-second after you’ve started swinging at them – causing the game to throw you a red card for killing a surrendered enemy. That happened to me more than a few times. Anyway, this is more of an annoyance than a game-breaker. 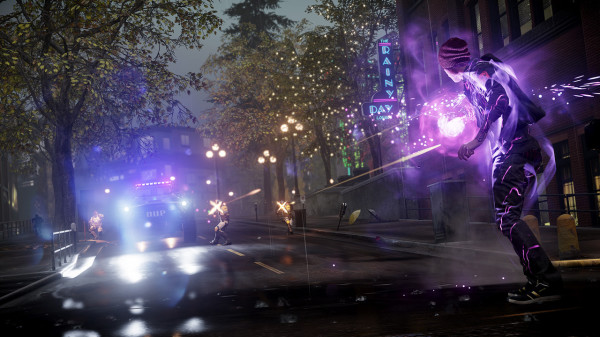 The other down-point is that Second Son seemed a bit short to me. Now, that could be because I didn’t go out of my way to complete side-quests or collect blast shards (in the interest of getting this review done sooner), but I’m sure the main stories of the other two were a bit longer. I could just be remembering wrong. At any rate, I was quite surprised. Before I knew it, I had acquired a bunch of new powers and was heading to the final boss fight.

Turns out that not collecting shards and upgrading powers didn’t hamper me at all in the final fight, and if you’ve done it, you’ll know why. It was an experience, though, as were all the other boss fights. Once you beat the final boss, the game gives you a cool reward and plonks you back in the sandbox to enjoy it while you finish up all the side-quests, shard collecting and base-conquering you might have left undone.

I guess I have to speak about the graphics, since it’s still early in this generation of consoles. Well, they’re extremely pretty. Is it an amazing leap forward from what we had before? No. With the PS3 and Xbox 360, games were already capable of realising any art director’s vision. The characters and environments could look exactly the way the designers wanted them to.

This is a superlative condition; once you’ve reached the point where games can look exactly like we want them to, we can’t really go any further. 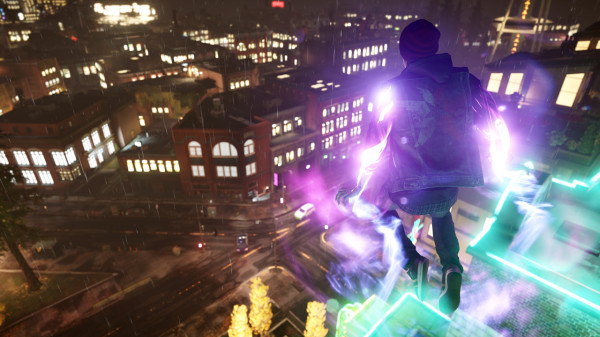 Sure, Second Son runs one level of resolution higher than most PS3 games (1080p as opposed to 720p) and it’s got a buttery-smooth frame-rate and nice anti-aliasing and whatever else, and these things are noticeable – but I think we’re finally reaching the point where critiquing the tech is just pissing into the wind, and now we can finally start critiquing games on what matters: the art design. On that front, Second Son is a winner.

Seattle is beautifully designed, the characters look great and the effects on the powers are awesome. I spent the first two hours using Delsin’s chain almost entirely because I liked the way the effect looked. The neon powers are also visually stunning.

So, here it is, probably the first big must-have game for the PS4. It’s lots of fun, it’s very pretty, and if you’ve got a PS4, you should go and buy it as soon as you can, because, well, what the hell else are you going to buy?