The victims managed to get some help from residents. 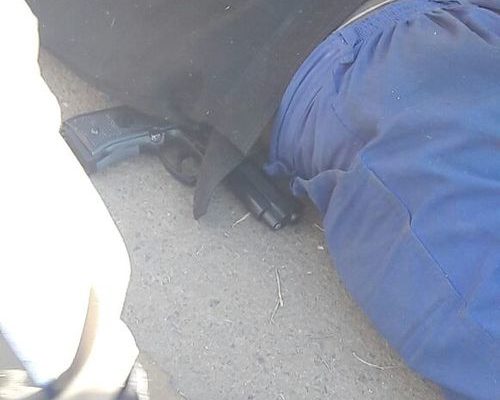 A suspect and his firearm as police get ready to effect an arrest.

Justin Badenhorst, 28, and his friends were coming from Trade Route Mall when four men in a Yaris tried to hijack them in Johannesburg, Westside Eldos reports.

Badenhorst spoke about the awful car chase and how they ended up in Riverlea.

The twenty-eight-year-old and his friends were on their way from Meredale Mews in his Polo Classic when four men pulled up in a Yaris and stopped in front of them.

Badenhorst said that his friend Linda Shabangu (25) was driving his car and managed to overtake the men, wondering why they would just stop in front of them.

“The second time they stopped in front of us, caught dead brakes, opened doors, we overtook them again. Next thing they were next to us with their guns telling us to pull over, and then we actually sped off.

“We started a high-speed chase in Meredale and then they managed to block us off, jumped out of their car, they opened my door and my friend who was sitting behind me, they opened his door too, they wanted to pull us out of the car,” said Badenhorst.

He explained how the one would-be hijacker tried pulling him out of the car while pointing the gun in his face. According to Badenhorst, when he tried to push the gun away, the man hit him with the gun in his hand.

At this time Shabangu panicked and put the car in reverse and managed to escape the hijackers. They were intent on getting the vehicle, so they continued the chase through the Total Garage near Southgate Mall.

Badenhorst said: “We got on to the Golden Highway, where there’s a fork going to the M1 and the other to Nasrec Road through Ormonde.

“We took the fork headed to Ormonde because we thought that the closest place that we could go to was Riverlea where they (his friends) live because Riverlea is a busy area, so if those guys could chase us until there we would have people to help us.”

The hijackers took the M1 route and Badenhorst and friends were relieved because they thought that they had lost them.

When the friends passed Ormonde View Estates on Nasrec Road they saw the Yaris going towards Gold Reef City on the M1.

The friends continued towards Riverlea, but when they approached the FNB stadium, Shabangu looked in the rear-view mirror and realised that the hijackers were still following them. He accelerated and the chase continued. The hijackers again managed to get in front of them, but this time Shabangu overtook them in oncoming traffic. They neared the roundabout at the entrance of Riverlea Extension.

“We were driving very fast there, and these guys were next to us, but then we heard a loud sound then we caught brakes and then we all ducked because it sounded like a gunshot.

“One hijacker was hanging out of the car pointing the gun at us, so as they caught brakes and the hijackers lost control and drove into two poles while we continued on to Riverlea.”

When the friends arrived in Riverlea, they told a few guys what had happened and then they all decided to return to the scene where the Yaris was smashed, and two of the hijackers were still around.

A group of angry residents turned on to the two hijackers, beating them with sjamboks, dragging them into the street, kicking and hitting them. They eventually tied the guys up and the police arrested the two men.

According to Badenhorst, one hijacker fled and the other escaped by boarding a taxi.