What happened behind the toilet door where Reeva Steenkamp was shot dead we will never know and could only speculate, Oscar Pistorius' ballistics expert yesterday told the North Gauteng High Court. 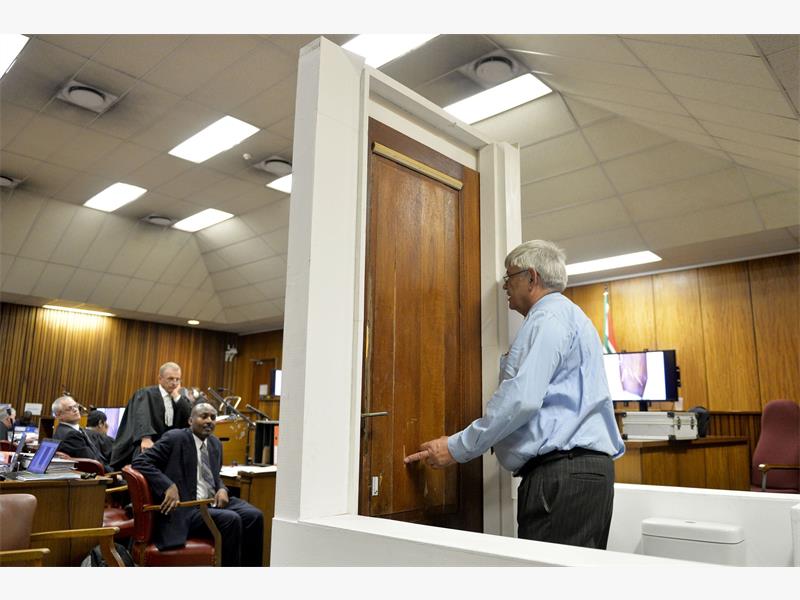 Forensic expert Wollie Wolmarans presents evidences during South African Paralympic sprinter Oscar Pistorius' murder trial at the North Gauteng High Court in Pretoria on May 9, 2014. Prosecutors in the Oscar Pistorius trial sought to show that his girlfriend Reeva Steenkamp was awake and ate approximately two hours before her death, which would contradict the Paralympian's version of events. AFP PHOTO POOL HERMAN VERWEY

Tom “Wollie” Wolmarans testified that he could only make deductions from what he knew, which was that four shots were fired through the door, four cartridge casings were collected and that he had collected a bullet fragment and a piece of tile from the toilet bowl after the police investigation was concluded.

Wolmarans told the court he had the “greatest respect” for the State’s ballistics expert Capt Chris Mangena, but disagreed with Mangena’s deduction about the sequence of shots and where Reeva was when the shots hit her.

He said Mangena even called him “oom” (uncle) and he sometimes referred to Mangena as “my seun” (my son).

He disagreed with Mangena that she had her hands over her head in a defensive position when she was shot in the head and that the same bullet hit her in the web between her fingers.

This was because there was brain matter and hair on the toilet, but nothing on the inside of her hand.

He also disagreed with Mangena that one of the shots had hit the wall, ricocheted at another point and that the fragments had hit Reeva in her back.

He concluded that she had sustained the injuries to her back by falling on a magazine rack and not because of fragments hitting her as her shirt was not damaged and the skin was not penetrated.

He said the bullet would have lost so much energy that it would not have been able to cause the bruises on her back and it probably fell directly into the toilet bowl after hitting the wall in two places.

It would also have been impossible for the bullet to hit Reeva in the back, jump over her body and land up in the toilet bowl, he said.

Prosecutor Gerrie Nel put it to him that the ragged edges of the bullet fragment and the wound on Reeva’s back coincided, but Wolmarans said he could not see it.

Wolmarans said he was present when tests were done to compare the sounds of a cricket bat against a door and shots, which sounded the same to him, although it was not so loud.

He was also present when decibel tests were done with Pistorius hitting a door with a cricket bat, but said he was not a sound expert and could not testify about it.

In addition he had hearing problems and suffered from tinnitus caused by many years of firing shots.

Wolmarans testified that he had never discussed the case with Pistorius, who threw up and left the room when he once unthinkingly produced a photo of Reeva’s body.

Wolmarans took exception when Nel accused him of being “biased” by mentioning Pistorius’ vomiting.

“I’m here to assist the court wherever I can… I’ve never lied in court,” he said.

Pistorius at times had his thumbs in his ears when Wolmarans testified and never looked up when close-up photos of her wounds were discussed.