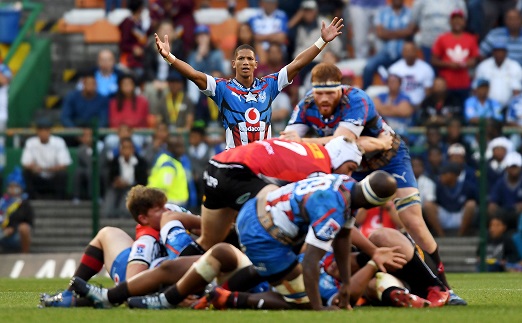 Their slow start played a key role in their loss at the weekend, Bulls coach Pote Human lamented after his team’s 24-23 Super Rugby defeat to the Stormers at Newlands.

With the hosts racing to a 14-3 lead, the Bulls had to play catch-up for the rest of the game, though they did well to fight their way back and eventually secured a crucial bonus point.

“The Stormers started well in those first 20 minutes when they just outplayed us,” Human admitted.

“We fought hard to get back in the contest, but we have to take it on the chin and be glad for the bonus point.”

The Bulls finally got their noses in front shortly after the break, taking a 16-14 lead, but they struggled to stay in the contest after the Stormers scored their third try by Herschel Jantjies.

“I thought we had enough chances to win this one, but it was difficult to play catch-up the whole time,” Human said.

While they were sweating over the shoulder injury of Pieter-Steph du Toit, Stormers coach Robbie Fleck believed his side had dominated the match.

“There were soft moments in the second half where we let them in but then it was all us,” he said.

“In the last 10 minutes we probably defended a bit much where we should have put our foot on their throat, but overall I think we physically dominated them.

“It shouldn’t have been as close as it was.”

Fleck said they would have a review after allowing the Bulls to score a late bonus point through a Manie Libbok try, when they conceded possession through poor decision-making.

“I don’t mind a bit of ambition and bravery as long as it works, but we’ll have a chat with the players about that,” he said.

“The Sharks are on 26 points so we will have to win all our games in order to beat them, the Bulls, Lions and the Jaguares, but what’s happened has happened and we are not going to dwell too much on that.”