Swys de Bruin labelled him a hero against the Waratahs last weekend. Here's a peek into what this young man is all about. 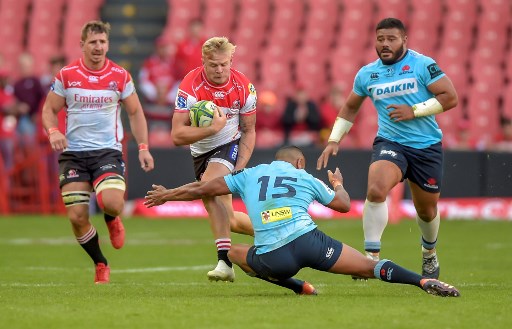 In the aftermath of his side’s narrow 29-28 victory over the Waratahs last weekend, Lions coach Swys de Bruin singled out a “hero”, the 21-year-old Tyrone Green.

The rookie, in his first Super Rugby campaign, delivered one of the game’s crucial interventions when he cleaned up close to his own tryline with various Aussie runners storming in.

His quick hands and feet saved a certain try.

“It was close,” said De Bruin.

“He did wonderful work there. He saved us.”

Yet the former Junior Springbok has caught the eye at various stages this season already, particularly on debut against the Rebels.

Here’s a bit more detail on another rising star within the Lions’ ranks.

I’m adjusting all the time, but I have a lot of experienced players around me. They help me a lot. To be honest, the step up is quite comfortable.

The two Springboks he leans on for advice are…

Elton Jantjies is a big influence, he’s very helpful and he’s such a professional athlete, so he’s got both great off-field and on-field advice. The other guy is Malcolm Marx. He’s calm and a leader. He’s a very good guy to be around with all the time. The pressure is less when he’s around.

If he had to choose between fullback and wing…

Personally, I’m a fullback, but for the team I’ll play anywhere. I’ve played on the wing quite a lot the past year, I don’t mind. There’s a lot more space at fullback, leading to more counterattack opportunities. You can make an impact in the line all over … and I like making an impact! Wing teaches you to look for work, which isn’t a bad thing too.

He’s been doing this for a long time already…

I’ve been playing rugby since I was four. I grew up with “bulletjie rugby”, so I’ve been playing for quite a while. We are an English family, so my dad played a bit of soccer, but there was never an expectation that I follow in his footsteps. I grew up in Stilfontein, which is a small town. Rugby really was the only sport there. My dad played soccer for Vaal Reefs.

It’s a real source of pride. Hacjivah Dayimani and I have played together for some time now. However, this is Wandi Simelane and I’s eighth year in the same sides. We matriculated in the same year. That’s almost unheard of nowadays, it’s a privilege being able to still run out with my friends.