Sloppy tackling, Garces’ whistle a toxic mixture as Springboks fall to All Blacks

A frustrating day at the office for Rassie Erasmus' troops as their opponents play the key moments better. 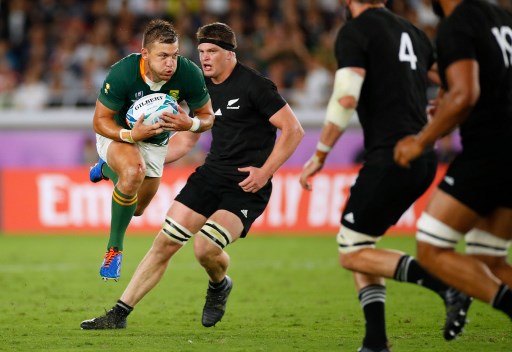 South Africa's Handre Pollard carries the ball during the Japan 2019 Rugby World Cup Pool B match between New Zealand and South Africa at the International Stadium Yokohama in Yokohama on September 21, 2019. (Photo by Odd ANDERSEN / AFP)

The Springboks were left to rue a poor first half as they went down 23-13 to the All Backs in their opening Pool B World Cup clash in Yokohama on Saturday.

That, at least, was the diplomatic way to put it.

But the dominant theme in the aftermath in this game will be how French referee Jerome Garces delivered yet another frustratingly inconsistent performance with the whistle, continuing a “tradition” of seemingly disadvantaging the Boks.

Nonetheless, the All Blacks deserve credit for punishing some sloppy defending in the second quarter to make the game safe, while the South Africa missed several opportunities in a second half, where the high humidity seemed to catch up with both teams in front of more than 70 000 spectators.

Bok right wing Cheslin Kolbe was nothing short of superb and by some distance the team’s best player in the air. There were at least two instances where he came on the verge of scoring by fielding a high ball and going on his weaving runs. He was also typically brave on defence.