The park alleges the cyclist resisted arrest, the situation 'spiralled', and that is how he sustained his injury. 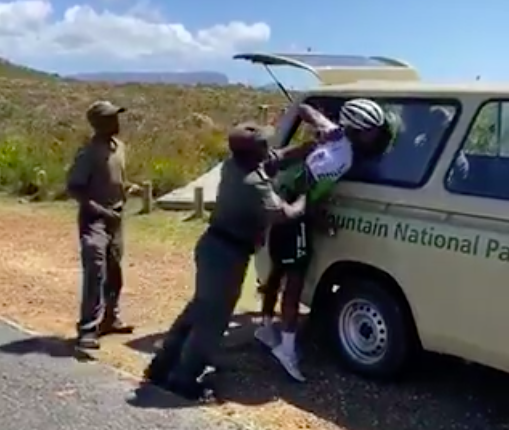 The incident was captured in a video by fellow cyclist Dovoan Le Cok and was later shared on social media showing about four rangers aggressively shoving the cyclist in the back of their van.

I filmed and saw what happened, you can contact me if you want.

According to a report by Times Live, SANParks confirmed on Friday afternoon that the incident had taken place. However, they allege that Dlamini resisted arrest and that, that is how he sustained his injury.

Dlamini was taken to hospital by the rangers.

We are aware of a video in which one of our riders, Nic Dlamini, was involved in an incident in Cape Town earlier today.

He's currently undergoing medical assessment after which we'll be able to provide a full update on what transpired.

“According to the TMNP section ranger, the cyclist had entered Gate 1 of the Silvermine section without paying the conservation fee nor showing proof of activity permits when requested,” SANParks head of communications Rey Thakhuli said.

“ … Upon investigating and finding the cyclist who could not produce his entry ticket or a valid activity permit, the situation spiralled causing the suspect to injure himself during the ordeal,”  he added.

“We are not going to speculate. He suffered a broken arm and a full investigation will ensue.

“We are calling on the public to act responsibly and not to make any speculations. Wait for the investigation to conclude and whoever witnessed it to come through,” Thakhuli concluded.

Thakhuli said statements would be taken from rangers who were at the scene as well as from Dlamini. He then urged possible witnesses to contact the authorities on 021 422 1601 before adding that the public to respect the park and pay the necessary conservation or activity fees on arrival.