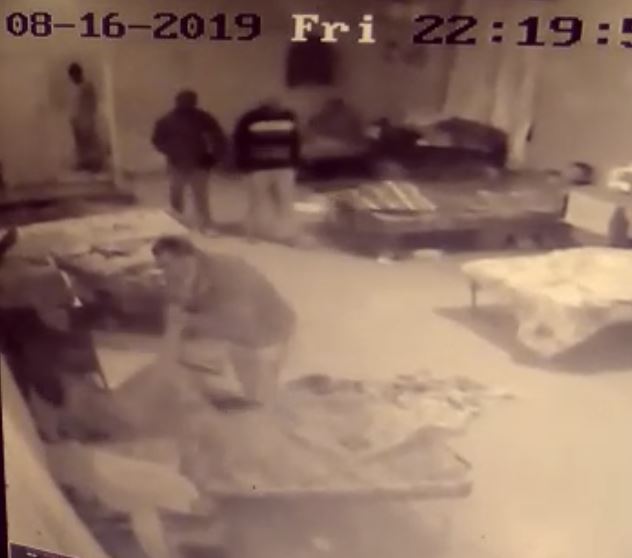 A screenshot of the video, allegedly portraying the principal of Jimmy Roos school repeatedly hitting a learner. Video and screenshot: Bloemfontein Courant

A disturbing one minute-long video has surfaced that allegedly shows the principal of a special school in Mangaung assaulting a learner at a hostel, reports Bloemfontein Courant.

In the footage, a man can be seen hitting the boy several times after waking him up from sleeping at around 10.19pm on Friday, 16 August 2019. The victim was reportedly fifteen years old at the time.

The man has been identified by various sources as the Jimmy Roos School principal, Sakkie Joubert. However, Joubert denies hitting the boy and denies that the man in the video is him.

A worker who requested anonymity gave one version of what happened that night.

“The boys were upset because they were denied access to their phones, which they usually get back on Friday evening, so they started singing loudly. When the principal came, he kicked in the door, went into the rooms and hit one boy in another room on the chest several times and then the one in that video,” said the worker.

In addition to denying he had ever hit a learner, Joubert said that a riot had taken place at the boarding facility on the night of the incident.

“They put out all the lights and broke windows. I went into the hostel, everyone was going to their rooms. I went to the first and second room and they were in their beds but then I went into the third room. When I turned my back he started singing and shouting to start the riot so I wanted to remove him because I was still waiting for the police,” said Joubert.

Joubert expressed that, although he had a broom in his hand, he only pushed a learner once.

“I pulled his leg to get him out of bed and the hostel so that the riot could stop,” he added.

The man in the video can be seen twisting the learner’s leg, stepping on him and hitting him hard enough to fall backwards.

Joubert also denied the contents of a complaint communicated to Bloemfontein Courant alleging that the principal had assaulted both pupils and workers while intoxicated.

“He does this a lot and the police here already know about him because he would get drunk and then come to the hostel at night,” said the worker.

Joubert has denied ever visiting the hostel while under the influence of alcohol.

After being made aware of the video, the Free State department of education said that the incident would be investigated.

“We will be investigating and action can only be taken after that,” said spokesperson Howard Ndaba.

“If anything unconstitutional is happening, then the law will take its course. The matter will be handed over to management, who will act swiftly, but I cannot tell at this stage how long the investigation will take,” he added.

Bloemfontein Courant has established contact with the Bloemfontein police, but have not yet received comment, and are in the process of obtaining comment from the Dewetsdorp SAPS. This will be added once received.

The video can be viewed here.