Covid-19: ‘We are fighting a biological war’ – SANDF

Jamangile added that the Covid-19 pandemic was an urgent warning to the SANDF to prepare 'for future wars' which also took unconventional forms. 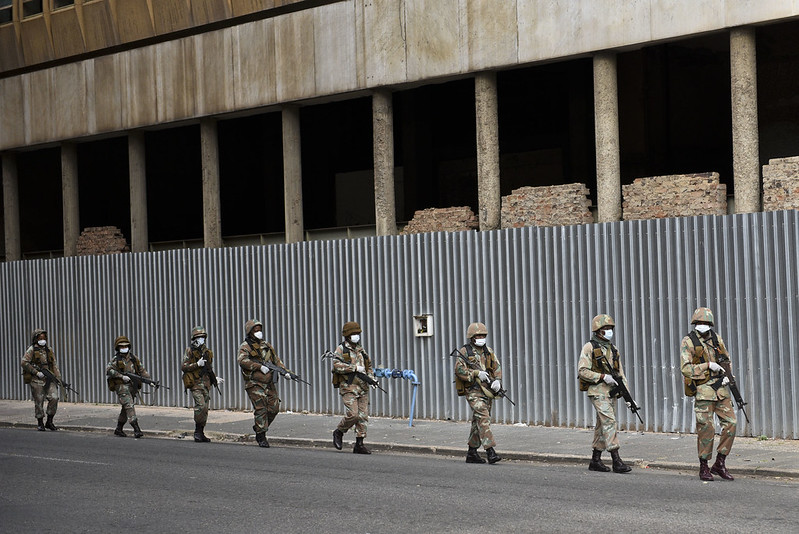 Members of the South African National Defence Force (SANDF) patrol the streets of the Johannesburg CBD, 1 April 2020, during a nationwide lockdown. South Africa's lockdown imposes strict curfews and shutdowns in an attempt to halt the spread of the COVID-19 coronavirus. Picture: Michel Bega

The South African National Defence Force (SANDF) has had to learn how to fight “a biological war” in its battle against Covid-19 – “the most deadly and dangerous war after World Wars One and Two”.

These were the words of the SANDF’s head religious officer, Brigadier-General Monwabisi Andrew Jamangile, the chaplain-general of the country’s armed forces.

This “war” claimed almost 500,000 lives around the world – making it “the most deadly and dangerous war we have experienced after World Wars One and Two.”

The senior officer was at the historic Castle of Good Hope in Cape Town, formally accepting the support of the Muslim Judicial Council (MJC) – moral support which he said was crucial to keep up the morale of South Africa’s fighting force.

Jamangile said: “Experts are telling us it is a biological war.”

Jamangile added that the Covid-19 pandemic was an urgent warning to the SANDF to prepare “for future wars” which also took unconventional forms.

He said the SANDF’s “bullets, missiles, bombs” and conventional armaments would not be the weapons of choice in these types of battles.

A “war that is destroying the nation invisibly” was just as much “a real war” – but would need to be fought differently.

“Our soldiers were trained for combat” – but were now up against “an enemy they cannot see”.

Their first task, as military commanders, had been to convince their own troops that this “invisible enemy” was actually real.

Only once they had accomplished this, could soldiers relay the threat to civil society.

And, even though this “war” was different, Jamangile said he was proud the armed forces had “defended” South Africans, as they had sworn to in their “oaths of office”.

The general said most of South Africa’s uniformed troops had “worked tirelessly”. He acknowledged soldiers’ families had often been fearful their loved ones would become infected with the novel coronavirus while on the front line. But Jamangile added that the troops themselves had no fear.

“There is no way that we can be scared because we are the last line of defence for this country,” he said.

The MJC’s Sheikh Irafaan Abrahams said the organisation “commended the commander-in-chief, President Cyril Ramaphosa, for his decisive leadership in leading the country and dealing with the Covid-19 pandemic”.

“The way that the members of the SANDF are dealing with communities is commendable. We experienced their deployment and involvement in our communities. This surely had a positive impact.”

Jamangile said it was his job to ensure soldiers were “nurtured spiritually”, to give them strength to fight on. He thanked the MJC and leaders of all religious groups for their support for their troops on the Covid-19 front line.

He also vowed that South Africa’s security forces “will be prepared, next time” for any future “biological war”.