Men and women alike were left wondering where the EFF leader got his stylish leather jacket. 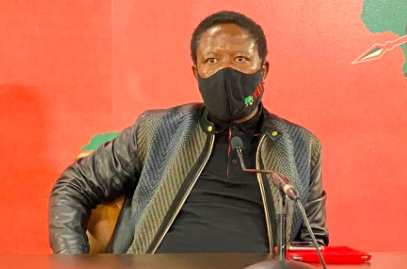 Julius Malema during a roundtable discussion with journalists on Thursday | Image: Twitter

This time around, however, everyone’s dying to know where he got his jacket so that they can get their own (if it is in their price range, that is).

The EFF leader appeared in a round table chat with journalists that was streamed via various online platforms on Thursday.

Despite everything that was covered in the nearly two-hour chat, viewers seem to have momentarily distracted by Malema’s style choices.

I wonder what label is the jacket Malema is wearing..#JuliusMalema pic.twitter.com/SD0yRwCzlz

Men and women alike have been tweeting the politician wondering what brand the jacket was. Guesses have ranged from the affordable H&M to more luxurious name brands like Gucci, Balmain and Louis Vuitton.

This isn’t the first or second time Malema’s style has made headlines.

Last winter, Malema trended for wearing a R21,000 jacket from Italian brand, Moncler and has previously had his $24,000 Breitling watch contrasted with his populist message.

In fact, these parallels have often been made throughout his career as Malema is a man with expensive taste.

As he gets older, his taste seems to have become less flashy and more streamlined which is perhaps why we might be seeing the emergence of Malema the style icon.