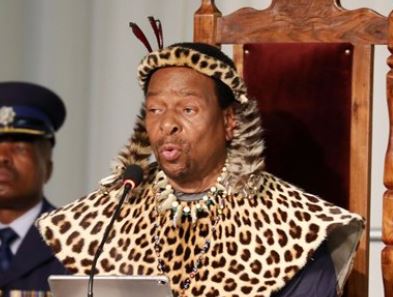 As of Sunday, South Africa has recorded a total of 767,679 positive cases of Covid-19, with 2,270 new cases identified since the last report.

58 more deaths have also been reported: 28 from Eastern Cape, 14 from Free Sate, 8 from Gauteng, and 9 from Western Cape.

“We extend our condolences to the loved ones of the departed and thank the healthcare workers that treated the deceased patients,” said Health Minister Zweli Mkhize in a statement. The couple fled to Malawi after being granted bail, and said their escape was a “tactical withdrawal” to “save their lives”.

“There have been clear and evident attempts to have myself, my wife and my family killed and despite our several attempts to report to authorities, there has never been state protection,” said Bushiri at the time.

They face charges of theft, fraud and money laundering. Five more trucks were set alight in another attack on Saturday night, bringing the total amount of trucks petrol bombed this week to 25. Photo: Twitter/@BOSBEER2006

Following the torching of at least 20 trucks on Thursday night, five more trucks have been set alight. Reports indicate the trucks were set alight on the R59, between Gauteng and the Free State, and on the N1, late on Saturday night.
According to police spokesperson Brigadier Motantsi Makhele, the trucks were forced to stop after a petrol bomb was thrown at one. The appointment of Mcebo Dlamini to become a paralegal in Johannesburg Mayor Geoff Makhubo’s office has proven “cadre deployment is alive and well” in the city, the Democratic Alliance (DA) said on Sunday.

The party revealed that after investigations into the appointment of staff at the City of Joburg, it emerged that Dlamini was one of the “questionable” appointments of late. Five suspects have been arrested in Pretoria on suspicion of being involved in the murder of the late 50-year-old Prince Lethukuthula Zulu.

Prince Lethukuthula Zulu’s body was found by security guards at his place at Graceland Residential Complex in Northworld, on 6 November 2020.

The suspects – four women, whose ages range from 27 to 42, and a 32-year-old man- were arrested on Friday night.

US expects to begin Covid vaccinations in early December – official The United States hopes to begin a sweeping program of Covid vaccinations in early December, the head of the government coronavirus vaccine effort said Sunday.

“Our plan is to be able to ship vaccines to the immunisation sites within 24 hours of approval” by the US Food and Drug Administration, Moncef Slaoui told CNN.

“So I expect maybe on Day Two of the approval, on the 11th or the 12th of December.”

It’s over! e.tv’s ‘Rhythm City’ comes to an end E.tv soapie Rhythm City will reportedly come to an end in 2021 after over a decade on air.

Despite consistently ranking among the top 10 most-watched soapies in the country and amassing an impressive 5.2 million viewers this year, the soapie is set to be replaced by another local show. The Bulls celebrate after securing their first major title in a decade. Picture: Gallo Images

Winning the franchise’s first senior silverware in a decade will make their fans and the golden generation of players that featured in “the glory years” very happy, Bulls coach Jake White hopes, following their 21-5 win over the Pumas to clinch the Super Rugby Unlocked title at Loftus Versfeld at the weekend.

It is the first trophy the Bulls have won since they claimed the third of their Super Rugby crowns in 2010, which had ended a decade of dominance that saw them also win five (one shared) Currie Cup titles.

Wonder try was a matter of instinct, says England’s May Jonny May, seen here during last year’s Rugby World Cup final against the Springboks, scored a superb try for England in their game against Ireland at the weekend. Picture: Gallo Images

England wing Jonny May said he had been running on instinct after scoring a stunning solo try in an 18-7 Autumn Nations Cup win over Ireland on Saturday.

The 30-year-old produced one of the all-time great Twickenham tries after bursting clear from near his own line before beating the Ireland cover, chipping ahead and then chasing down his own hacked kick for a score between the posts.