Court it is: ANC to oppose Ace Magashule suspension case

In March 2018, Magashule said ANC members who took the party to court over internal grievances could face expulsion from the organisation. 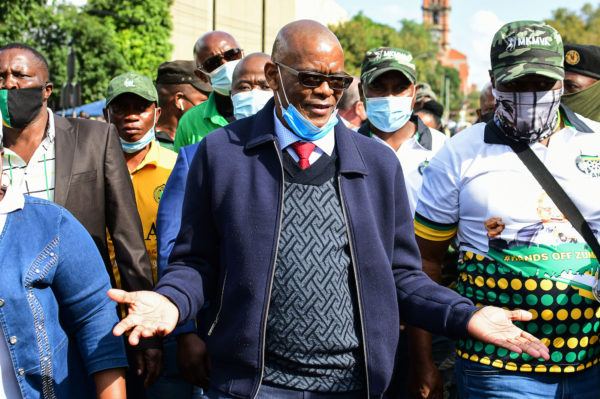 The ANC will oppose secretary-general Ace Magashule’s court application to have his suspension lifted, the ruling party said on Monday afternoon.

The party said in a statement that it had appointed Ledwaba Mazwai Attorneys as instructing attorneys.

They will be “supported by the following three Senior Counsels and 1 Junior Counsel”, who are:

The move comes after the party said on Sunday that it had “noted” court papers filed by Magashule last week, and after the secretary-general went on live television to address a crowd at Jacob Zuma’s corruption trial in Pietermaritzburg on Monday.

It remains to be seen how soon party officials will react after Magashule’s latest disobedience.

‘Nobody will ban me’

After former president Zuma’s trial was postponed to 26 May on Monday, Magashule and others addressed supporters outside the court. Zuma’s trial relates to the 1999 arms procurement deal.

The address was in direct defiance of the suspension conditions placed on Magashule. He has been barred from:

Before addressing the crowd, Magashule said in isiZulu that he would keep it short because he had been banned, acknowledging that he was knowingly transgressing a condition of his suspension.

“Nobody under a democracy will ban me. Nobody will remove the ANC from me. I will not form any party. I will die in the ANC,” he went on to say.

He also wants ANC members mobilised in support of Zuma for his court appearance next week.

“Next time when we come here on the 26th of May, we will bring the whole Free State and KwaZulu-Natal here,” he said.

He also said that he would “talk on the 26th of May”, meaning he intends to flout his suspension condition yet again.

Last week, Magashule served papers on the ANC, arguing that the rule forcing him to step aside from his position is unconstitutional.

While he is suspended he is also not allowed to continue with his work, including representing the ANC or making comments on behalf of the ANC.

In the papers, Magashule argued the party’s rule 25.70 in its constitution, that those who have been charged with serious crimes in a court of law should step aside, undermined the constitutional principle of innocent until proven guilty.

Magashule’s papers also argue that the rule was created to specifically target him, even though others – such as deputy chairperson of the ANC in KwaZulu-Natal Mike Mabuyakhulu – have already complied with it.

In March 2018, Magashule said ANC members who took the party to court over internal grievances could face expulsion from the organisation.

And earlier this year, the embattled former Free State premier told the country that ANC members should avoid the courts to air their grievances, saying “you don’t resolve ANC matters through the courts of law”.