The former State Security minister argued that at no stage did he ever say or suggest the SSA must stop the investigation. 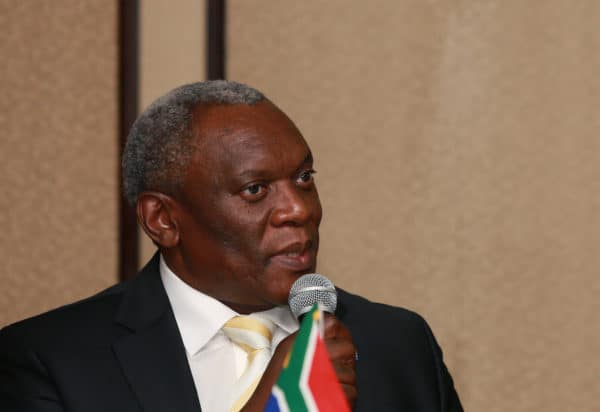 Former State Security minister Siyabonga Cwele testified at the Commission of Inquiry into Allegations of State Capture for the first time on Tuesday and dismissed claims he sought to stop the State Security Agency’s (SSA’s) investigation into the controversial Gupta family.

Cwele, who was state security minister from 2009 to 2014, appeared before commission chairperson Deputy Chief Justice Raymond Zondo to deal with evidence relating to the SSA, among other issues.

In 2019, former head of foreign intelligence Rieaz “Mo” Shaik told the commission that Cwele had summoned senior intelligence bosses to a meeting after he learned the Gupta family were going to be investigated.

Responding to the allegations on Tuesday, Cwele said “it was not correct” that he summoned intelligence bosses  Shaik, former head of intelligence Gibson Njenje and former SSA director-general Mzuvukile Maqetuka to a meeting in 2011.

“No, that’s not correct chairperson. The correct version is that, if you have read my statement… it was not in 2011 that exactly that they had the [Fikile] Mbalula story. It was in 2010 and as I have put it I called Mr Njenje to my office in Cape Town with his deputy to come and explain what I have heard discussed,” he said.

Cwele told the commission he had called Njenje to ask whether the SSA was conducting a communications interception of the Gupta brothers, Ajay, Atul and Rajesh.

The former minister said he was told that Njene was on leave at the time, prompting him to confirm with the director-general’s deputy.

“[The deputy director-general] did say yes we are [conducting an interception]. I [then] asked did [him] did you get the direction of the judge and he said no… they were instructed by the top three [Shaik, Njenje and Maqethuka], which was the top management,” he said.

He said when Njenje returned from leave instead of arriving with his deputy in Cape Town, Njene showed with Shaik and Maqetuka.

“I see in both of their statements they say I summoned them and particularly Mr Shaik. I never summoned Mr Shaik to that meeting. I never even asked him and I never asked Mr Maqethuka to come,” Cwele said.

He then told the commission the meeting went on for hours until the next day.

Cwele denied the claims made by Shaik, Njenje and Maqethuka and that he called the meeting in order to put a stop to SSA’s investigation into the Guptas.

He said, instead, that he sought to be furnished with a directive from a judge authorising the interception. However, the former intelligence bosses could not provide such a document.

“I was enquiring about whether they had a direction of the judge. As you know if you want to intercept a person as minister who responsible for oversight… one of the responsibilities is that I make sure they act within the law.

“If somebody is alleging interception and a deputy director-general says no they didn’t have the direction of the judge that worried me a lot because those have happened in the past,” Cwele told the commission.

He further argued that at no stage did he ever say or suggest that the former intelligence bosses must stop the legal operation they were pursuing as it was permissible for them to do so without any interference from him.

“I made it clear that if you believe there is some wrongdoing by any person, we are authorised by law to investigate or intercept that person,” the former minister said.

Cwele said another matter he was concerned with was the so-called conflict of interest regarding Njenje’s business interests with the Guptas.

“I clearly remember saying when we employed you, we asked yourself and Mo Shaik to stop all business operations you were doing because you are coming to this environment, but I was disappointed now that he was conducting business and he was also [investigating] people in relation to his personal interests in those businesses.

“Those are the things I put in the summary. At no stage did I say they must stop the investigation. I said go and get direction from a judge because if it is true, there’s no judge who would refuse you the direction from the allegations they were putting.

“There were many allegations that they were putting and I was convinced it would be easier for them to get a direction from the judge,” he said.

Cwele, however, agreed with Maqethuka it was true that he also called the meeting because of the relationship between the Gupta family and the former president Jacob Zuma.

It was alleged that Cwele had opposed the investigation, saying it was not pursued bona fide, but was rather being pursued by Njenje who was “protecting his business interests”.

The investigation into the Guptas was motivated by several instances including information from US intelligence services and concerns about the brothers’ involvement in the purchase of a uranium mine.

The decision to probe the Gupta family was also taken following a report a report that current Transport Minister Fikile Mbalula, speaking at an ANC NEC (national executive committee) meeting, said one of the Gupta brothers had informed him he would be offered a Cabinet post before he was officially told about it.

The NEC meeting in August 2011 saw a tense discussion about the influence of the Guptas.

Due to national security being at risk, Shaik, Maqethuka and Njenje took a decision to investigate the controversial family.

A few days later, the trio were allegedly summoned to Cape Town for a meeting with Cwele, which was described as “extremely confrontational”.

They said there was no discussion of interception in the meeting, instead they were mostly “rambling” about the conflict of interest regarding Njenje’s business interests with the Guptas.”