Jolidee Matongo’s wife: This is a bitter pill to swallow 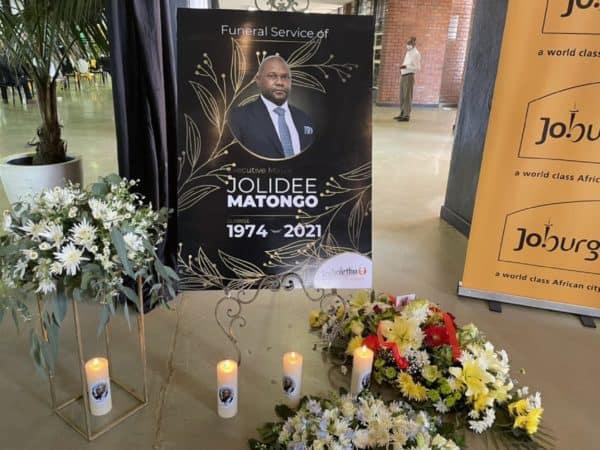 The wife of the late executive mayor of the City of Johannesburg, Cllr Jolidee Matongo, said her husband’s funeral in Finetown Hall, Johannesburg, was something she never imagined would happen.

She had her message read out by Mpho Matsepe.

In it, she said she never imagined attending her husband’s funeral.

“It is a bitter pill to swallow,” she said.

The couple met in high school and her husband consistently showed up for his wife’s choir performances.

“Papa Joel, I am grateful for giving me the love you have given me and for our son. You were truly a unique breed … my humble, kind husband who always had a smile on his face.”

ALSO READ: Tragic death of Joburg mayor Jolidee Matongo could be a lesson for all

Ms Matongo said she would hold on to her husband’s mantra: “God will provide.”

Mashatile said the loss of Matongo still cut deep and this would likely be the case for many weeks and months to come.

“It deeply pains us that our comrade Jolly is no more. He has left us too soon while we were expecting so much from him.”

He said Matongo’s company was rare: a dependable colleague and a servant to the people. Mashatile added that the late mayor put the people’s interests first and that in the upcoming local election the ANC would be the “only party that can deliver service delivery for all”.

Matongo died last weekend following a car accident. Before his passing, he had spent a full day in Soweto with President Cyril Ramaphosa on the campaign trail.