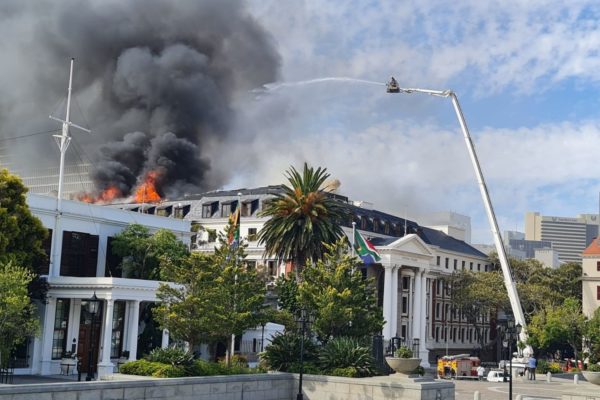 The National Assembly’s roof caught fire again as firefighters try to extinguish the blaze once more.

Parliament spokesperson Moloto Mothapo confirmed the news on Monday afternoon, describing it as devastating and distressing.

He said the fire had re-emerged on the roof of the National Assembly building and added that more firefighters were on their way to help battle the blaze.

The Department of Mineral Resources and Energy has given motorists a bit of reprieve by announcing a hefty cut in fuel prices, effective from midnight on Tuesday.

Those using illuminating paraffin will also pay less, with the wholesale price decreasing by 71 cents per litre. The maximum retail price for LP Gas will also decrease by 70 cents.

Civil society organisation Democracy in Action has filed an urgent interdict application to stop President Cyril Ramaphosa from receiving the first part of the Commission of Inquiry into Allegations of State Capture’s report.

Democracy in Action chairperson, Thabo Mtsweni has asked the Johannesburg High Court to interdict the handover to Ramaphosa, as he believes that the president “is not the correct person” to receive the report.

Mtsweni also wants the court to grant an order forcing the report to be delivered to Deputy President David Mabuza instead.

Last month, the organisation had written to Zondo asking him to determine if there may be a conflict of interest in Ramaphosa’s receiving the report.

The Braam Fischer Airport in Bloemfontein had to be evacuated on Monday afternoon, after officials discovered a hand grenade in a passenger’s luggage at the check-in counter.

Airport police arrested a 28-year-old man who had arrived at the airport to check-in his luggage. He handed the bag over at the check-in counter, where his luggage was searched.

The G4S officer on duty placed the man’s bag inside the X-ray scanner, which detected metal inside the bag and the round object was visible on the monitor. The security officer then did a physical search of the bag and found the drill hand-grenade.

Relocation of Parliament from Cape Town will only serve to make the city “white again”, according to African Transformation Movement (ATM) chief of policy and strategy, Mzwanele Manyi, who joined the debate on Monday morning.

The idea of Parliament’s relocation to Pretoria dates back to the 1990s, but the conversation has since been brought up again following a fire that broke out in Parliament on Sunday.

Manyi suggested that Parliament’s relocation would enhance the culture of whiteness in Cape Town, which is South Africa’s legislative capital.