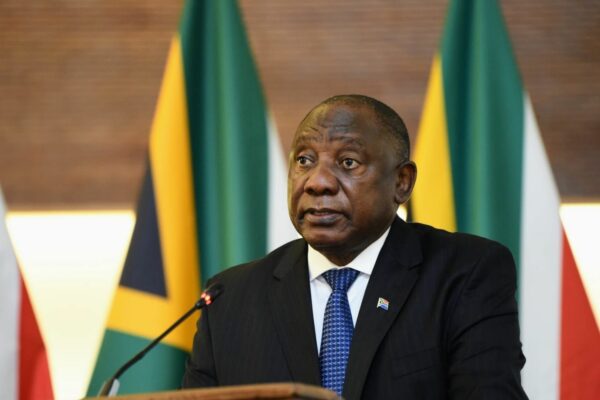 Cosatu president Zingiswa Losi says the chaotic scenes on Sunday at the federation’s Workers’ Day rally in Rustenburg, which forced President Cyril Ramaphosa to abandon his keynote address, were always likely to happen.

Losi says the refusal by angry workers to listen to Ramaphosa’s speech, was “inevitable” because Cosatu had previously warned the ANC about workers who are getting tired of the governing party’s failed promises.

“We would always remind the ANC that workers are getting tired. When we went for the local government elections [last November], we warned the ANC.

“We said workers are fed up, workers are getting tired of the promises that are made but [with] no delivery,” she said in an interview with Newzroom Afrika.

The workers, who are believed to be part of striking mineworkers at Sibanye-Stillwater, refused to be addressed by President Cyril Ramaphosa, accusing him of not caring about the plight of the poor and working class.

The angry workers want government to intervene to end the protracted strike at the gold mine that started in March.

Members of NUM and the Association of Mineworkers and Construction Union (Amcu) are demanding an increase of R1,000 a month, but Sibanye-Stillwater is offering R850 each year for three years.

Koko: ‘We should thank the Guptas, there was no load shedding when they ran Eskom’

Former Eskom CEO Matshela Koko responded to findings of the capture of power utility and the Guptas part in “stopping load shedding”.

On Sunday morning, Koko aired his views on Twitter: “If the Guptas indeed captured and controlled [Eskom] as it is suggested by CJ Zondo then the country has a reason to thank them.”

“After all, they stopped load-shedding, sustained planned maintenance, and they did not burn diesel to keep the lights on.”

In a scathing indictment of Koko’s tenure at the power utility, Chief Justice Raymond Zondo found Koko was an integral part of the Gupta family’s capture of Eskom.

EFF set to establish its own labour union, says Malema

Economic Freedom Fighters (EFF) leader Julius Malema says his party is in the process of establishing its own trade union to address workers’ challenges.

Malema on Sunday said the labour union would draw from the successes of the Red Berets’ labour desk.

“We are having a labour desk because we are preparing to have an EFF union. The union of the EFF is inevitable, and that union will never sell workers out and will always be on the side of workers,” he said.

The EFF leader was speaking at the party’s International Workers’ Day rally in Middleburg, Mpumalanga.

Democratic Alliance (DA) leader John Steenhuisen on Sunday arrived in Ukraine in the western city of Lviv, to embark on what he called “a six-day tour” of the war ravished country.

Steenhuisen announced his arrival in an audio clip on Twitter.

The DA leader said his visit was to ascertain “for myself the situation in a country that has been under siege from the Russian army”.

“Over the course of the next week I will be visiting refugee camps as well as meeting with various mayors, governors, business leaders, students and ordinary Ukrainian citizens to see, first-hand, the effects of the Russian invasion and the ongoing occupation of parts of Ukraine,” Steenhuisen said.

Moon not sighted in SA, Eid to be celebrated on Tuesday

The United Ulama Council of South Africa (UUCSA) has confirmed that the moon signalling the end of the blessed month of Ramadan has not been sighted in South Africa.

Therefore, Muslims across South Africa will be celebrating Eid-ul-Fitr, which culminates the end of the Islamic month of Ramadan, on Tuesday.

The announcement was made by UUCSA Secretary General Moulana Ebrahim on Sunday.

With Eid now big on Tuesday, Muslims will have to keep one more fast on Monday.

Muslims also have to dispense of Sadaqatul fitr, a compulsory charity which becomes payable on the occasion of Eid-ul-Fitr.

The correspondents’ dinner is an annual black-tie event that sees the United States president invite and have a laugh with distinguished guests.

It is organised by the White House Correspondents’ Association as it honours several journalists for their contributions to media.

They pick the headlining act and this year it was our very own Noah, as he wasn’t afraid to trade jokes about politicians, journalists and celebrities attending the event.